Posted on 5 December 2014 by Kenneth Zino 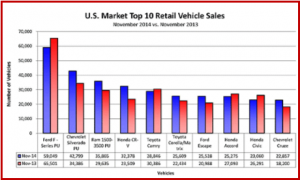 The Detroit Three now face strong competition in pickup truck and SUV segments from offshore brands who continue to chip away their share.

In an all too familiar trend, November sales were up strongly with offshore brands increasing their market share to 55.3% in spite of robust truck sales that traditionally favor the Detroit Three. They declined to a 44.7% share.

“The industry is closing out 2014 on a strong note,” observed AIADA President Cody Lusk. “Gas prices, interest rates, and winter weather are creating a particularly friendly market for SUVs and trucks.”

Ken Zino is an auto industry veteran with global experience in print, broadcast and electronic media. He has auto testing, marketing, public relations and communications expertise garnered while working in Asia, Europe and the U.S.
View all posts by Kenneth Zino →
This entry was posted in sales and tagged aiada, autoinformed, autoinformed.com, Ken Zino. Bookmark the permalink.