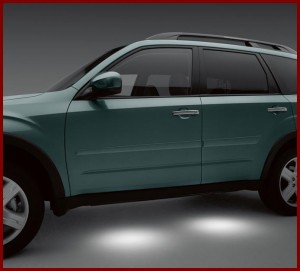 Customers love the puddle lights, but road salt corrodes the electrical connectors. The design has been changed.

Subaru of America is increasing the prices on its hot selling Forester crossover – five consecutive annual sales records – for the 2015 model year. The Forester 2.5i model will be available in base, Premium, Limited and expensive Touring versions starting at $23,045 for the base model 2.5i with six-speed manual transmission. The turbocharged 2.0XT will be offered in the Premium and Touring versions, with the Premium starting at $29,345 and Touring at $30,945. The 2.0XT Premium now has a standard All Weather Package. All prices include an $850 destination charge.

For 2015, the base model 2.5i has a rear vision camera and color multi-function display as standard equipment. Previously unavailable, the 2.5i Premium manual transmission model is now equipped with a moonroof standard. New for 2015, the 2.5i Touring models will receive standard 18-inch alloy wheels. All Touring models have keyless access and start, HID lights and chrome rocker trim. Navigation is now optional on Touring models.

EyeSight uses a stereo camera design to provide a detection angle wider than that of radar-based systems. EyeSight option packages are lowered $500 from the previous model year. In keeping with automaker’s bundling of options to increase profits, the All Weather Package with EyeSight is $1,295. EyeSight and Navigation is $1,895.

As with all previous Forester models, the 2015 comes standard with Symmetrical All-Wheel Drive, a distinction from the competitive models that come with front-wheel drive as standard and offer all-wheel drive as an extra-cost option.

Ken Zino is an auto industry veteran with global experience in print, broadcast and electronic media. He has auto testing, marketing, public relations and communications expertise garnered while working in Asia, Europe and the U.S.
View all posts by Ken Zino →
This entry was posted in prices and tagged autoinformed, autoinformed.com, Ken Zino. Bookmark the permalink.