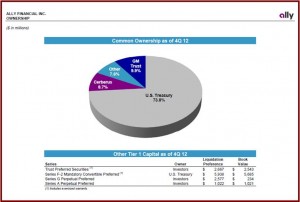 Ally Bank today announced that it has reached an agreement to sell a portfolio of agency mortgage servicing rights (MSR) to Ocwen Financial Corporation. The latest Ally asset sale comes from MSRs related to mortgage loans with an unpaid principal balance of approximately $85 billion as of the end of last January, and an estimated $5 billion of agency MSR created based on commitments made through the end of February. The purchase price for the MSR asset is about $585 million as of the end of January, and the sale includes the transfer of the representation and warranty liabilities associated with the majority of the loans sold.

Ally Financial, the owner of Ally bank and formerly known as GMAC, became insolvent because of its reckless home mortgage lending practices, resulting in a controversial taxpayer subsidized bailout after the housing bubble peaked in 2006 and subsequently burst. Ally is in the process of shedding all liability from what’s left of its mortgage business as it reorganizes as a bank holding company providing consumer banking and auto financing.

The U.S. Treasury, via taxpayers, currently holds about 74% of Ally common equity, and $5.9 billion in mandatory convertible preferred securities, which have a dividend rate of 9%, after a more $17 billion was spent during the bailout. Ally has repaid Treasury $5.8 billion thus far.

Treasury has actually made money on its Troubled Asset Relief Program or TARP started under President Bush and implemented under the Obama Administration that successfully prevented the complete collapse of the global economy when the marketplace failed.

In effect, GM is recreating GMAC once again. The purchases will allow GM Financial to support dealers in markets comprising 80% of GM’s global sales. The combined consideration will be approximately $4.2 billion, subject to certain possible closing adjustments. GM Financial’s assets are expected to double to approximately $33.0 billion and its liabilities, including consolidated debt, will increase to approximately $27 billion compared with $11.8 billion on 31 December 2012. The closings of the transactions are expected to occur in stages throughout 2013.

Ally also has the right to sell Ocwen its remaining MSR portfolio in a subsequent closing.  This portfolio is in excess of $30 billion in unpaid balances. Ally claims it contains borrowers who have the ability to refinance in the near term.  Ally said has received interest in this portfolio from other financial institutions and is currently evaluating the best option for the Bank.

The transaction is expected to close in stages over the next few months and is subject to approval by Fannie Mae and Freddie Mac. These two other corrupt home mortgage institutions are financially sick, if not insolvent, because they fully participated in the housing bubble. They too are now being propped up by U.S. taxpayers after the deregulation fiasco promulgated by the Republican Party let Wall Street, banks and hedge funds go unmonitored, which resulted in their criminal behavior – thus far unpunished – that collapsed the global economy.