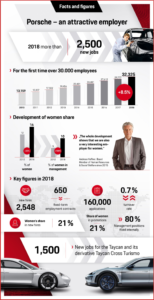 With the workforce steadily expanding despite increasing electrification across the model range, Porsche says that at the end of 2018, 32,325 people were employed across the Group, constituting an increase of 2,548 employees, or 8.5%, compared to the previous year. (AutoInformed.com: Porsche Takes on Tesla EV with 600 Horsepower Mission E or Watt? Pure EV Porsche Crossover Ready for Serial Production)

Within this number is the transfer of more than 650 colleagues from temporary to permanent contracts. This change is caused by the “continued positive business trend.”

Porsche claims there’s no sign of that growth stopping. Over the next few months the company is intending to hire upwards of 1,000 skilled employees just to build the Taycan and its derivative Taycan Cross Turismo, both of which are the first electric sports cars to come out of Zuffenhausen.

Production of the Taycan will generate 1,500 new jobs in total. 160,000 applications and an instability rate of 0.7% in 2018 also “show that the attractiveness of Porsche as an employer continues.”

The sports car manufacturer has almost doubled its workforce since 2012, with millennials (born between 1980 and 1995) or even younger vintages making up over 50% of current Porsche employees. A crucial strategic goal for the company is to increase the proportion of women in the entire workforce: where this figure was just 12% in 2012, it is now at approximately 16%.

“The number of women in management positions has tripled in this period. This overall growth shows that we are a very attractive employer for women and indicates that we are pursuing the right strategy for employee development,” comments Andreas Haffner, Member of the Executive Board responsible for HR and Social Affairs at Porsche.

He wasn’t forthcoming about the issue of quotas that are “fixed parameters for promoting women are enshrined in the target agreements for executives across all executive departments. The defaults are based on the proportion of women in the upper salary bracket in each department and help to ensure that the promotion policy is fair to women and men.

The ideological fog surrounding the sure to be controversial quotas at some point in corporate speak is “training is the first step to achieving this, and already the share of female trainees undertaking technical training has increased from 6% to almost 30% in the last few years. The next step is targeted recruitment of skilled female employees. It was possible to recruit women to at least 21% of positions available in 2018. The systematic increase of women in the overall workforce brings about a desirable long-term effect, reflected in the fact that 21% of the promotions awarded in last year’s management-level promotion exercise went to women, where this figure was just 5.5% in 2012.”

Porsche had a record-breaking 160,000 job applications received in 2018. The 2018 employee opinion survey said 94% of employees stated that they consider the sports car manufacturer to be an attractive employer.

“Our employees are very happy working with us and strongly identify with the company and its products,” says Haffner, pointing out that “the extremely low staff turnover rate well below one percent” is further evidence of this. During in 2018, the sports car manufacturer once again filled around 80% of management positions from its own employees.

Ken Zino is an auto industry veteran with global experience in print, broadcast and electronic media. He has auto testing, marketing, public relations and communications expertise garnered while working in Asia, Europe and the U.S.
View all posts by Ken Zino →
This entry was posted in electric vehicles, labor issues, manufacturing, new vehicle. Bookmark the permalink.