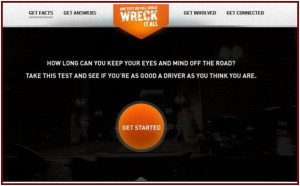 Distracted driving is now the leading cause of death among U.S. teenagers.

The Department of Transportation has launched a new website aimed at educating teenage drivers about the dangers of distracted driving, which is now responsible for  about 5,500 deaths and 500,000 injures annually in the U.S. Distraction-related fatalities represented 16% of overall traffic fatalities in 2009, according to National Highway Traffic Safety Administration (NHTSA) research. Distraction.gov/teens  is designed provide information about the hazards of different types of distracted driving.

The website’s opening page has a simulator challenge that begins to introduce young drivers to distracted driving dangers via a video game-like approach. From there, the facts about distraction are shared along with some decidedly deadly statistics. Site visitors can sign an online pledge to drive distraction-free – hopefully while not driving.

“We know that our youngest drivers are the most likely to get into a distraction-related crash.  But for most parents, telling your teenagers not to text or talk on a cell phone while driving doesn’t guarantee safe behavior.,” said Secretary of Transportation ray LaHood.  “So we’re trying a different angle entirely: create a visually appealing environment, show them the facts about distracted driving in plain language, and encourage them make their own safe decisions.”

In 2009, Secretary LaHood launched a national anti-distracted driving campaign against this dangerous behavior, including a dedicated website to provide a comprehensive source of information on the issue. Since then, DOT has also hosted two national summits devoted to reducing distracted driving, crafted sample legislation which states can use to adopt distracted driving laws, and initiated pilot law enforcement programs in Hartford, Conn., and Syracuse, N.Y., modeled after the Department’s successful efforts to increase seat belt use and curb drunk driving. Meanwhile automakers continue to expand electronic offerings and in car connectivity to the internet.

Currently 35 states, the District of Columbia, and Guam have banned text messaging by all drivers. Nine states, the District of Columbia, and the Virgin Islands have prohibited all hand-held cell phone use while driving. This only gets at part of the problem since research shows that any phone use – hand free or hand held –  while driving provides a cognitive distraction that results in behaviors equivalent to drunken driving.

The original distraction.gov site has also been redesigned. There are infographics, laws in your state, and the famous “Faces of Distracted Driving” videos.