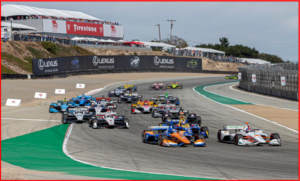 Colton Herta leads the start of the IRL Grand Prix of Monterey.

Team Penske’s Josef Newgarden (No. 2 Hitachi Chevrolet), a 28-year-old from Hendersonville, TN clinched his second series title in the last three years by finishing eighth in Sunday’s double points race at Laguna Seca. He joined Sam Hornish Jr. as the only Americans to win multiple series crowns since 1995.

Newgarden entered the race needing a fourth-place finish to secure the title regardless of the performances of his fellow contenders, Andretti Autosport’s Alexander Rossi (No. 27 NAPA AUTO PARTS Honda), teammate Simon Pagenaud (No. 22 DXC Technology Team Penske Chevrolet).  Pagenaud finished fourth in the race and second in the series championship, 25 behind Newgarden. Rossi took sixth to finish third in the championship, 33 back of the champion. Rossi came in 41 points behind, Pagenaud 42.

Newgarden gave team owner Roger Penske his 16th series championship, including the fourth in the last six years. Josef Newgarden didn’t have a race-winning car on Sunday afternoon, but his eighth-place finish was enough for him to earn his second Series Championship, and Team Penske’s 16th. 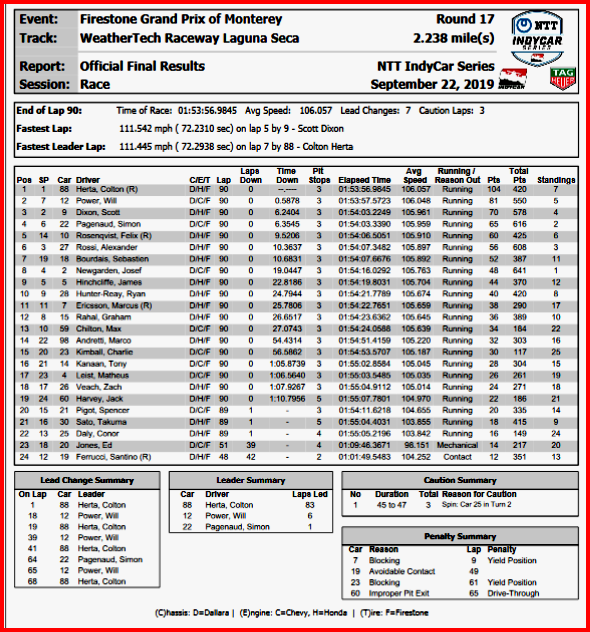 Starting from the fourth position, Newgarden knew exactly what he needed to do to win the IndyCar Series title and fell into the fourth position early on, while also defending the fifth position from James Hinchcliffe.  As tire degradation was extreme at the hot, 11-turn track, Newgarden began catching third-place Alexander Rossi just 10 laps into the event. Newgarden made his first pit stop on lap 13 behind Rossi. A fantastic stop allowed Newgarden to come out of the pits in front of Rossi, but he eventually gave up spots on the track to Rossi and Simon Pagenaud.

The race win for Honda by Colton Herta –  he never was overtaken for the lead, except during pit cycling as he posted a .5878 of a second margin of victory over runner-up Will Power (No. 12 Verizon Team Penske Chevrolet) – gave Honda its second consecutive Engine Manufacturer’s championship. Five-time series champ Scott Dixon (No. 9 PNC Bank Honda) finished third, as well as fourth in the championship.

“Yeah, it was a perfect race,” Herta said. “Whenever you win an IndyCar race, it has to be a perfect race. You can’t really make mistakes and get away with it, just because there’s always two or three other guys on that day that (sic) can win. For sure there was a few guys that could win today, and we just outdid them. We had the pace on them, and we were definitely the best today.”

Despite a nearly perfect day, Herta was unable to wrest the NTT IndyCar Series Rookie-of-the-Year honors from Chip Ganassi Racing’s 28-year-old Swede, Felix Rosenqvist (No. 10 NTT Data Honda). Rosenqvist came into the weekend with a 49-point lead over Herta but needed a masterful ride from a 14tth starting position to a fifth-place finish that beat him by five points. Rosenqvist finished sixth in the championship standings while Herta took seventh. If they stick around the IRL, they will be contenders for the series title.

“Yeah, that’s still the missing part,” said Rosenqvist referring to a strong year despite not having a victory. “I think we had a good chance this weekend, for sure. Yesterday, we were really fast, but we had to start from 14th and that’s how it is. At least we made it more exciting with the rookie championship. Colton did an amazing job, his second win this year. I think he’s going to be one to watch next year, so big congrats to him. He did an amazing job this year.”