The Film – Chevy 100, An American Story – Debuts in Detroit 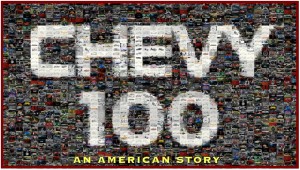 Despite the clumsiness of presentation, there is no taking away from the cars – many breathtakingly beautiful, and some historically significant.

Chevrolet is the subject of a new Chevrolet Centennial film “Chevy 100, An American Story,” which explores Chevrolet through the views of owners, collectors, journalists and what are closely edited historians. The 80-minute documentary – actually Chevy 100 is a commercial – produced by filmmaker Roger Sherman, premiered last night at the Detroit Institute of Arts.

Do not confuse this Chevy 100 infomercial with other serious documentaries sponsored by GM and produced by Ken Burns during his long association with the largest automaker in the U.S.

Chevy 100 lacks an organizing theme for its narrative – other than it’s time to sell more Chevrolets. Instead, Chevy 100 is comprised of sporadic observations along with snapshots of the history of the brand, supplemented with large amounts of quick-cut contemporary footage from collectors clubs and fawning owners.

Chevrolet’s history is tangled, and its beginnings were subject to Wall Street stock market maneuverings that are wearily similar to current financial history.  As outlined in a revised book – David Buick’s Marvelous Motor Car – a complex set of events led Willy Durant to develop the Chevrolet automobile.

There are serious gaps in automotive history and lapses of historical perspective in this disjointed account, which tries – among other things – to downplay Henry Ford and the Model T. In the case of hot-rodding, Ford’s flathead V8, which appeared in 1932 and changed automotive history, is omitted. No doubt this is because Chevrolet didn’t have a credible response until the small-block V8 of 1955. Chevrolet – then as now – sometimes lagged in  responding to emerging markets, as was the case in recent history with GM’s derisive  dismissal with polite arrogance of Toyota’s and Honda’s hybrid cars.

In some cases, the voice-over in Chevy 100 doesn’t match what’s being shown on the film. And the marketing sanitized version of Louis Chevrolet’s actual role, and Willy Durant’s stock market manipulations as noted before are tough to sit through with a straight face.

Chevy 100 is a missed opportunity. The film is crushed by the lightweight marketing decision to promote the sale of current vehicles and apparently play to current ethnic groups that sales is targeting or that to the film maker seem politically correct. Too bad, because taken straight up, the history of Chevrolet portrayed with an unflinching look from objective observers at the social, political and economic contexts under which it operated, reveals nothing to apologize for.

Indeed, there is much, much more to be proud of than the Chevy 100 film gets at. I say this as someone who owned a black ’52 sedan as my first, but not my last Chevrolet, and as one among millions who busted his or her orange-paint-stained knuckles on many a mouse or rat motor.

Nevertheless, in spite of the clumsiness and ignorance of the presentation, there is no taking away from the cars – many breathtakingly beautiful, some historically significant. And Dinah Shore steals the show… Be forewarned, you will not see the history of Chevrolet, or the history of the automobile in U.S.A. that Chevrolet is a significant part of, given justice in this treatment.

Chevy 100 will air nationally on 21 November at 8 p.m. on the Velocity Channel. It will then be available on DVD from chevymall.com.