The GM Grinch that Stole Christmas, or Did It? 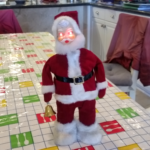 The timing seemed as odd as GM actually depicting its urgency during the November restructuring announcement. Why and –  above all –  why now? Back then before the Trump shutdown of the Federal Government, GM said it would accelerate its business plan, building on a strategy it laid out in 2015. It omitted, we note,  that the plan has resulted in lack-luster returns for shareholders. “GM is acknowledging what most automakers hold private: the marketplace is moving faster than automakers,” we opined then.

Executive Summary: There will be a 15% reduction in GM’s salaried workforce, the closing of the Lordstown and Detroit-Hamtramck assembly plants in the US and the Oshawa complex in Canada in 2019. Baltimore Operations and Warren Transmission plants will also be shut down in 2019. The arrival of year-end auto sales data makes things clearer in the view of consultancy LMC.

“In a current environment with an economy that is likely to grow near the 3% level, a US auto industry holding steady above the 17-million-unit level and GM earning nearly $6 billion through the first 3 quarters of 2018, many are asking, why would GM make cuts of this magnitude now?” writes LMC.

LMC’s answer is layered, various and not given to sound bites.

GM made substantial structural changes as part of the bankruptcy and government bailout in 2008/2009. It closed 11 assembly plants in North America and dropped the Hummer, Pontiac, Saturn and Saab brands. This cut subtracted 1.3 million units, or 22%, from GM’s capacity. 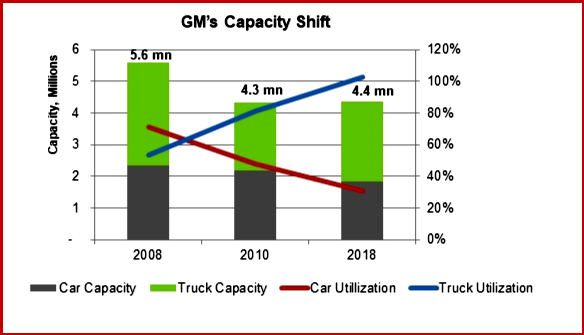 However, consultancy LMC notes, the prominence was on removing truck manufacturing capacity and it still left GM with substantial scale and a significant amount of car capacity just as the market was shifting to trucks. The closure of several truck plants brought GM’s truck utilization to 81% in 2010 even while an excess in car capacity was starting to show.

After the US gasoline spiked at $4.11 a gallon in July of 2008, a pronounced shift to smaller cars occurred. The Small and Compact Car segments had a combined share in 2007 of 36% of non-premium sales, and that rose to 41% in 2008 and 44% in 2009. However, GM was not able to take full advantage of the smaller segment surge as they were – and still are  – dominated by Japanese and Korean brands.

As oil prices fell through the Great Recession and smaller crossover SUVs were introduced, that shift went through a pronounced reversal. SUVs (with CUVs) accounted for 25% of LV sales in 2008, but SUVs have skyrocketed to an projected 47% in 2018. That shift left GM with excess car capacity at a time when the total market is past its peak and with truck output that was capacity constrained. This year, GM’s truck capacity utilization has exceeded 100%, while car utilization is at, ahem, 31%.

“The economic and auto recovery cycle has been long and steady and while there are few signs of an imminent recession, there are some warning signals at the macro level such as slower global and US GDP growth, rising interest rates and general trade risk. A specific concern for auto is affordability, as consumers find it more difficult to manage monthly lease or loan payments. That, combined with substitution from the robust used vehicle market.” (see AutoInformed on 2018 Auto Retail Sales Down. Transaction Prices Set Record)

With rising availability of vehicle/ride sharing, LMC expects the new vehicle market to contract, not grow. LMC’s current forecast – subject to revision – for 2020 is 16.7 million units, or a -3.3% decline from 2018’s 17.3-million forecast.

Conventional wisdom has it that the auto industry is facing the most profound transformation since its inception, going from traditional internal combustion engine (ICE) vehicles, with human drivers, to electric motors replacing ICEs and autonomous vehicles replacing drivers. Maybe so, maybe not.

Now anticipation of this alleged transformation requires  enormous investment capital that will likely not produce a return for quite some time. “In this environment, inevitably, something had to give to fund the investment and keep shareholders on board,” says LMC.

“There is no question this is a bold and proactive move,” in LMC’s view. “Mary Barra and the GM management team deserve credit for showing the willingness to take risk and make tough decisions that they feel are right for GM, despite the timing and criticism.”

However, the restructuring plan leaves GM with other uncertainties. While LMC does not expect the market to shift back to cars, other segment shifts are inevitable and there will be external shocks which could put pressure on GM if investment in plant flexibility does not continue.

More importantly, LMC thinks the road to shared autonomy at scale is 15+ years away, so the investment required to transform GM from an automaker into a full-scale mobility company may be significantly more than expected and a return on that investment may never fully materialize… only time will tell.