The History of Lexus 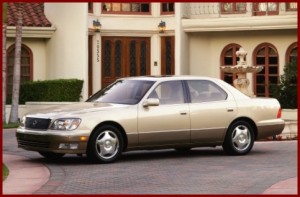 While the flagship LS 400 was the breakthrough car for Lexus, in 1998 it showed the RX 300 crossover, that caught Detroit unaware and catapulted the nascent luxury brand into U.S. sales leadership.

Lexus launched in 1989 with two luxury sedans, one small and the other large aimed directly at the Mercedes-Benz S-class. The full size Lexus LS 400 was priced more than $10,000 under top of the line German offerings in the U.S. At the time, Lexus made bold claims of superior quality and durability, as well as several years without a marked decrease in the quietness, smooth ride, and exterior and interior finishes, among others, of the new line.

These, of course, were scoffed at by other luxury automakers. Honda’s Acura luxury line had debuted previously, and Nissan introduced its Infiniti line with a performance emphasis and a controversial “Rocks and Trees” marketing campaign that emphasized the Japanese heritage of the vehicles.

Lexus took a quality and value approach that was significantly helped by the long-standing financial success of the many Toyota dealers who become Lexus dealers. Not only were these dealers expert in the auto retail business, but profit margins from a high number of sales per outlet allowed them to pamper customers. A strong factory warranty policy reinforced the selling proposition.  What ensued was a recasting of the luxury car business, first in the U.S., but ultimately globally. Following is a timeline of significant Lexus events:

Ken Zino is an auto industry veteran with global experience in print, broadcast and electronic media. He has auto testing, marketing, public relations and communications expertise garnered while working in Asia, Europe and the U.S.
View all posts by Ken Zino →
This entry was posted in auto news, marketing, milestones, news analysis and tagged history of lexus, lexus. Bookmark the permalink.