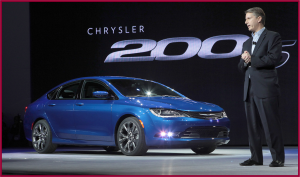 Chrysler Group’s Sterling Heights, MI Assembly Plant, once slated for closure, will build the 200. It competes in the toughest car segment in the U.S. long dominated by Toyota and Honda.

Let us start with where the money is, the truck market. AutoInformed has already covered the full-size aluminum Ford F-150 and the mid-size Chevrolet Colorado and Canyon pickups, but consider that these are now two different approaches from the Big Two Detroit automakers to address the future.

The 700 pounds of weight reduction claimed from the Ford F-Series, albeit with few important technical details such as curb weights by body style and no fuel economy ratings, represents a bold move to continue to sell the long-standing most popular American vehicle in a size and shape we know in spite of impending fuel economy and CO2 regulations. (Ford F-150 Aluminum Pickup Sheds 700 Pounds Late this Year)

Whether Ford can successfully build an aluminum F-Series is the question. This is technology deployment on a scale unheard of – potentially one million trucks a year – in the prosaic automaking business that loves and stamps and welds steel in overwhelming quantities, and has been doing these for more than a century. We are not talking the 7,000 Ferrari’s that are sold annually with exotic materials, but real volume and real money and real risk. Repeat risk.

The aluminum body panels and bed of the F-150 pickup requires expensive advances in tooling, manufacturing and servicing. There are unknown quality, durability and cost effects, including insurance premiums for owners and repair procedures. Moreover, there is the bottom line literally. When Ford starts making the aluminum F-Series late next year, can it be priced combatively, err competitively, against the other two Detroit offerings?

Ford’s average transaction price on its current truck is more than $40,000. F-150 is the best-selling vehicle in the U.S. and has been for decades. The reward is that it remains so. The risk comes from GM with its award winning 2014 Silverado and Sierra pickups. Combined they could take over truck leadership with their steel bodies, albeit backed with high technology in the powertrain and numerous aerodynamic and other fuel-saving tweaks. By the way, the Ram pickup from Chrysler has been on the sales move as well, 356,000 in 2013 for a 21% increase year-over-year. We will wait and see how this all sorts out, but it is the automotive equivalent of the High Noon showdown. (GM Sweeps NACTOY Car and Truck Awards at NAIAS)

In the flesh of steel, so to speak, the mid-size Chevrolet Colorado and GMC Canyon pickups due next fall are much larger and closer to their full-size brothers  than I thought after seeing them all together on the show floor. Umm, too close to make a difference in total GM sales is my first gut reaction in a segment dominated by the Toyota Tacoma with its average transaction price of $24,000.

However, on reflection, I think this is really a long-term hedge play by GM – led by product development guru Mark Reuss. If the proposed fuel economy regulations stay at 54.5 mpg by 2025 after the so-called mid-term review late in this decade, then the full-size truck will  an endangered species similar too non-obstructionist Republican politicians. A shorter-term question is whether GM can price them for ~$25,000, at least at the entry level, and take on Toyota. While the economy continues to recover slowly at anemic growth rates and super-sized uneven income distribution, their intended blue-collar buyers are hurting. (GMC Shows 2015 Canyon Midsize Truck Ahead of NAIAS,)

(Memo to the numerous critics of the new GM management team I talked with at NAIAS. Reuss, head of global product development, CEO Mary Barra and President Chris Ammann are all in exactly the right jobs for their talents. If they meld as team, and more importantly, the frozen middle level employees at GM follows them, they are going to the World Series, which is the price of survival these days in the automotive big leagues.)

The remaining member of the Detroit Three, counting Fiat-controlled Chrysler Group, showed a car. Sales of the Group are dominated by Ram pickups, Jeeps and minivans at roughly two-thirds of the total. With the entry of the compact Dodge Dart last year (83,000 total), and now a new mid-size Chrysler 200 sedan, the automaker needs to prove that it can get back into the car business, especially against the Asians, which dominate it in the U.S. (In China, Fiat needs to establish a manufacturing base for small Jeep SUVs under planning or in production already.)

December 2013 saw the continuation of the family car battle royal – the U.S.-built Honda Accord displaced the Toyota Camry as the top selling car for the month in fourth place. The Camry was in fifth place, although Camry finished 2013 as best-selling car in the U.S. The Honda Civic, Honda CR-V and Nissan Altima finished in sixth, seventh, and eighth places. There has never been a better time to buy a passenger car, as we have said before, but the Detroit Three need to have cars, not only trucks in the Top Ten Selling list. (December Auto Sales Stall – Worry or Fluke?)

The Chrysler 200 at introduction will have two carryover engines, one a badly outclassed V6 engine, the most popular choice in the segment. The 200 will be the first mid-size sedan to have a nine-speed automatic transmission, which comes as standard equipment. However, the benefits of the advanced-technology transmission appear muted when powered by the 2.4-liter MultiAir four-cylinder engine. In theory the addition of more gear ratios reduces the frequency of speed changes associated with upshifting and downshifting – fluctuations that hurt fuel economy, but 38-40 mpg is the bogey here – see the Nissan Altima or Mazda6. We will not even talk about the Honda Accord and Toyota Camry and Ford Fusion Hybrids. Where is the 200 Hybrid? Moreover, the quality of the new ZF nine-speed is suspect as it held up the introduction of the Jeep Cherokee for months in its first application. So again, a wait and see.

Ken Zino is an auto industry veteran with global experience in print, broadcast and electronic media. He has auto testing, marketing, public relations and communications expertise garnered while working in Asia, Europe and the U.S.
View all posts by Ken Zino →
This entry was posted in new vehicle, news analysis and tagged aluminum, autoinformed, autoinformed.com, Ken Zino, naias. Bookmark the permalink.

2 Responses to Thoughts on NAIAS Vehicles that Really Matter