2017 Tigers or is that Kittens Ready for Home Opener 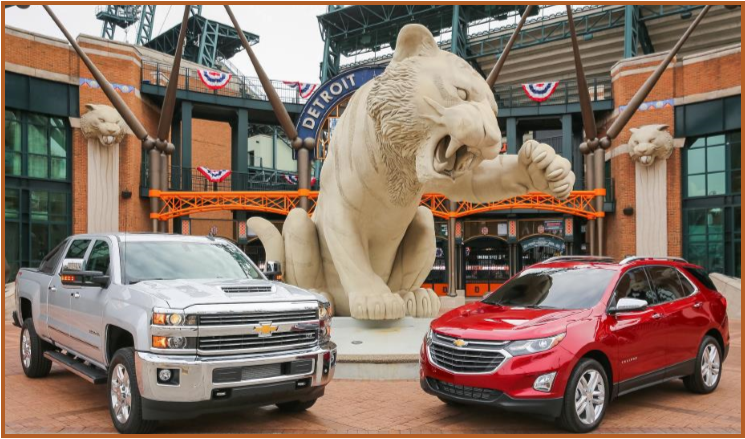 A Silver Ice Metallic 2018 Silverado 2500HD and a Cajun Red 2018 Equinox crossover in front of Comerica Park on Woodward Avenue Monday 3 April 2017, just prior to being loaded by crane into the center field Chevrolet Fountain in time for the start of the 2017 Detroit Tigers season in Detroit, Michigan.

The home opener at Comerica Park is this Friday, when the Tigers take on the Boston Red Sox. Ugh, you might remember a RHP named Porcello, the 2016 American League Cy Young award winner with the Red Sox whom we blithely traded. Then there’s Mad Max Scherzer who barbecues batters with a different kind of slider, another unwilling refugee from Motown (Less Town?) because he was paid what he was worth. 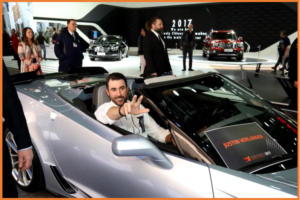 Detroit Tiger Ace Justin Verlander at the 2017 NAIAS in a Chevrolet Corvette – another kind of Ace.

Over the dreary Detroit winter, Tigers fans heard a lot of talk about dumping salary, but no talk from (mis-) management – now that the heroic Mike Illich is gone – on how to win from the gushing Motown media who where – true to form – promoting one of the worst NFL teams in history, who will go nameless here in crepe hanging respect for their record.

Miguel Cabrera – perhaps whistling past the corner of Michigan and Trumbull – thinks we have a shot at the non-World Series. I guess he hasn’t looked at Cleveland lately. Maybe the team should look at their current spring training record instead.

And before the MLB season, watch ex-Tiger manager Jim Leland take Team USA all the way to win the World Baseball Classic, the authentic World Series in AutoInformed’s view. This means you, Brad Ausmus, who is barely .500 as a manager after what looks to be with good odds a Hall of Fame career as a catcher.