Tiny Three-Cylinder VW Up! to Debut at IAA Frankfurt 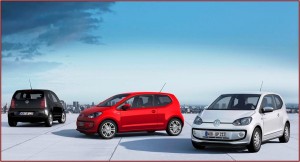 VW Up! is a pint sized Polo so to speak.

Volkswagen has released pictures of the production version of the tiny VW Up!, which last appeared as an electric car concept two years ago at the IAA or Frankfurt Motor Show. The two-door, four seat small car at 3.54 meters is seven inches smaller than the Mini, and will also compete with Alfa Romeo MiTo, Fiat 500 and in Europe the Toyota iQ. No word on whether the VW Up! will come to North America.

Volkswagen was also vague about the European pricing, hinting that the car will be priced less than the larger Polo and based on what it calls a new financing model known as AutoCredit2.

In a statement the company said “for many people, this will make the goal of driving a safe and economical new car more attainable than ever. Like the Beetle back in the 1950s, one could say that the Up! is once again ‘democratizing” car driving.” So this likely means Up! will be oh a $14,000 car, in Europe where small car prices are much higher than in the U.S. 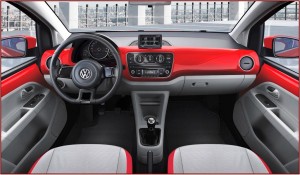 Like the Fiat 500, the VW Up! exterior color carries into the interior.

“If the goal is to maximize space, the ideal form for a small car would be a rectangular box. In the Up! we were able to sculpt such a box with a clean and powerful design that does not lose sight of space utilization,” said Klaus Bischoff, Head of Design for the Volkswagen Brand. Trunk space at 8.9 cubic feet can be expanded to 33 cubic feet if the Up!’s rear seat is folded down.

Up! will first be launched in the European market in December with three versions: Take Up is the entry-level car, Move Up! is a mid trim level model and High Up! is the loaded one, if loaded can apply to such a transportation appliance. An electric Up! is planned for 2013 and there likely will be diesel versions as well. (I’ll spare you all the puns and jokes made possible by the Up name.)

VW Up! power will be provided by new generation of three-cylinder gasoline engines, ranging in output from 44 kW (50 horsepower) to 50 kW (for a natural gas version) and 55 kW (75 horsepower). Combined fuel consumption including a Stop/Start system is said to be 4.2 l/100 km for the small motor and 4.3 l/100 km for the highest output one. Both of these 1-liter engines are said to emit less than the 100 g/km CO2.