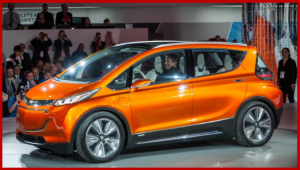 The future of transportation?

It’s counter intuitive that a majority of all-new vehicles dominated the CR list that is published in the Annual New Car April Issue. “New” usually means new problems in automotive land. – new assembly problems, new hardware problems, and new infotainment and software glitches.  Confirmation that these are Top Ten vehicles will come with the eventual publication of in-use problems reported by owners during the initial year or years of ownership in subsequent CR reliability surveys.

Heading the 2018 Top Ten list is the all-electric Chevy Bolt that earned Top Pick honors in Consumer Reports’ (CR) newly created Compact Green Car category (Chevrolet Bolt EV at 4.5 Million Miles, Maven Expands Los Angeles Car Sharing with Chevrolet Bolt ). The hatchback delivers ok range at 200 miles plus, crisp acceleration and handling at a what is called a “mainstream price of $38,424 as tested.” Taxpayer subsidies can make the Bolt less costly, though., at least for the buyer.

CR claims that with 250 miles on a charge, the Bolt is a good option for someone who might never have considered an EV before. However, in the marketplace the Bolt is clearly a victim of inconsiderate behavior on the part of would be buyers. During 2017 only 23,297 Boots sold compared to almost 586,000 Chevy C/K pickup trucks in a strong overall market of more than 17 million units. Thus, is the ignominious fate of most hybrids and pure EVs. Taking a leaf from Bolt’s showroom struggles, the original all-electric vehicle from Nissan saw sales drop – falling Leafs so to speak – by -20% to just over 11,000.

While Consumer Reports clearly wants to play in the Green vehicle market for business and image reasons, buyers like, nay love trucks and the people writing electrification releases should be, well, green with even.

CR named a total of four Toyota models to its Top Picks list, the most of any manufacturer and in keeping with a long-standing trend. In addition to the compact Corolla and the mid-size Camry, Toyota also has the top-rated Highlander mid-size SUV and the Sienna minivan in a segment invented by Chrysler. Getting named a Top Pick is no small road trip but requires impressive reliability. Standard on all are Automatic Emergency Braking and Forward Collision Warning – they helped Toyota secure those four spots.

The only other manufacturer with more than one vehicle in the Top Picks list is Chevrolet, with two—the Bolt and the Impala, a large sedan.

The F-150 tops the full-sized pickup truck category. The best-selling vehicle in America from an ailing Ford Motor is a workhorse that CR claims pulls ahead of the pack thanks to its weight-reduced design and fuel-efficient turbocharged six-cylinder engine.

To be designated a Consumer Reports Top Pick, a model must have an exemplary Overall Score in its vehicle category. This single number consolidates the findings from four key areas: subjective road-test performance, predicted reliability (a dubious assumption), owner satisfaction, and safety. Consumer Reports’ 2018 Top Picks list, Car Brand Report Card and more are available in the Annual Auto Issue, and online at http://www.CR.org/April.