Tougher Vehicle Economy Standards to Save Billions in Costs? 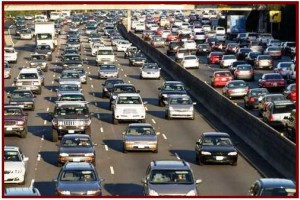 Absent is an honest discussion of what happens when rising vehicle prices force people to keep driving older vehicles longer – an almost certainty as the standards under consideration along with safety regulations already mandated could add $6,000 to $8,000 per vehicle, after fuel savings.

A new study from the American Lung Association in California claims that the benefits in lives and dollars saved by adopting tougher vehicle emission standards now under consideration by the California Air Resources Board is worth the cost.

Under review in California are “Advanced Clean Car” standards, which include smog and particle pollution controls, greenhouse gas emission or fuel economy standards. Worse in my view is a misleadingly proposal called “zero emission” vehicle sales that mandates as much as 20% of new vehicle sales in California be comprised of electric vehicles or plug in hybrids that ignores how the electricity used  is generated. California, the largest vehicle market in the U.S, in effect sets national policy since at least a dozen other populous states are likely to adopt its standards.

According to the report – The Road to Clean Air – California could save at least $7.2 billion per year in health and other societal costs and reduce all major air pollution-related health impacts – from asthma attacks, premature deaths and hospitalizations to lost work and school days – by 70% if (and that’s a big if in my view – keep reading) the California fleet of vehicles is converted to the next generation of cleaner, more efficient vehicles by 2025.

As is currently fashionable, the report also claims that “greater benefits can be achieved by further accelerating introduction of zero and near-zero emission technologies, such as battery electric, plug-in and fuel cell vehicles.”

Absent is an honest discussion of what happens when rising vehicle prices force people to keep driving their older vehicles longer – an almost certainty as the standards under consideration along with safety regulations already mandated could add $6,000 to $8,000 per vehicle, after fuel cost savings are accounted for.

Pressure or advocacy groups rarely – if ever – acknowledge that higher fuel economy standards are controversial, and they usually don’t explore the soundness of their assumptions. (Ever see a California Air Resources Board assessment of the cost of its aborted electric vehicle mandate of the 1990s? All car buyers paid for this fiasco.) 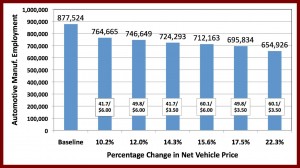 Vehicle price change and automotive manufacturing employment in 2025 have perverse effects - the higher the cost, the worse it is for the economy and the environment. (CAFE mpg/gas $ gallon)

One study that stands out in contrast from the Center for Automotive Research at the University of Michigan succinctly concludes that the tougher the new standards, the lower auto industry employment and the worse the air quality since consumers will hold onto vehicles even longer than they do now as the result of price increases ranging in the thousands of dollars per vehicle. (See EPA, DOT and California Want Higher Light Vehicle Fuel Economy Rules in Place by September. Jobs Are at Stake)

Last May, President Obama announced that EPA, DOT and California would begin working together to assess the performance and costs of a variety of technologies that could be available in model years 2017-2025 as the first step in possibly extending the current national emission and fuel economy standards. That was before Republicans regained control of the House of Representatives in November and proposed a series of actions to prevent further national increases in standards.

Nonetheless the three agencies have completed an interim technology assessment – also controversial because it is not peer reviewed and contains assumptions that critics call ludicrous, such as claiming further vehicle weight reduction is free – that is the background support for calls for 60 mpg gallon requirements.

“Pollution from passenger cars and trucks is largely responsible for our dirty air and its huge health toll. Our new study reveals the benefits in lives and dollars saved by adopting tough vehicle emission and technology standards,” Warner claimed.

The National Automobile Dealers Association pegs the 2009 average price of a vehicle at $29,000. Adjusted for 2025 dollars, the actual price in the CAR model could be close to $50,000; thereby causing total industry sales to be about 13 million units, roughly 4 million lower than they could be.

The current corporate average fuel economy standards of 27.5 mpg for passenger cars and 23.5 mpg for pickup trucks and sport utility vehicles increases to 35.5 mpg for cars and trucks on a combined EPA average by 2016.

The Road to Clean Air says that under current standards, vehicles on the road in 2025 will generate more than 270 tons per day of smog forming pollutants and cause $14.5 billion per year in health and societal costs, including $5 billion per year in public health costs and thousands of cases of illness. Converting the fleet to cleaner, more efficient vehicles would avoid as much as 190 tons per day, or more than 70% of these smog forming emissions.

On an individual basis, the American Lung Association in California report finds that an average car under current standards will cause more than $4,700 in health, environmental and societal damage over its unstated lifetime – the equivalent to $1.19 in damage per gallon of gasoline, or about $20 per fill-up.

In April 2010, DOT and EPA established greenhouse gas emission and fuel economy standards for model year 2012-2016 light-duty cars and trucks.  In the fall of 2010, California accepted compliance with these federal GHG standards as meeting similar state standards as adopted in 2004, resulting what has become the first coordinated national program.

1 Response to Tougher Vehicle Economy Standards to Save Billions in Costs?