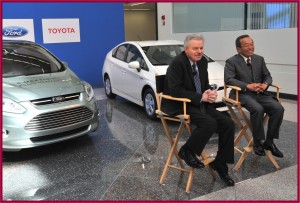 Derrick Kuzak, then Ford gvp, Global Product Development (left) and Takeshi Uchiyamada, Toyota evp, Research & Development in August of 2011. Kuzak, a quiet extremely competent engineer, was expert on delivering JV programs across differing  cultures, including with the Japanese. This came from his long series of successful collaborations with Mazda. Had he not retired, the outcome might have been different.

The Toyota Ford agreement to build rear-wheel-drive hybrid systems for light trucks and SUVs has died. In an unusual statement, Toyota said that after a feasibility study, “we have agreed to develop hybrid systems individually.”

In a separate release earlier in the day, which likely caused the Toyota statement and also likely caught the reticent Japanese by surprise, Ford said “We know what it takes to build world-class hybrids, and we now will build and leverage that expertise in-house,” according to Raj Nair, group vice president, global product development.

“By continuing to develop a rear-wheel-drive hybrid system on our own, we can extend our advanced hybrid technologies to new vehicle segments and deliver even better fuel economy across our lineup,”Nair claimed.

Toyota and Ford will continue to evaluate the feasibility of working together on next-generation standards for telematics and will consider other areas for future collaboration as well, it is claimed. This we view with considerable skepticism. (AutoInformed – Ford and Toyota to Develop a New Hybrid System for Light Trucks and SUVs as well as Future Telematics Standards)

Announced with great fanfare in 2011, the Ford Toyota JV made a certain sense if you did not take into account the different cultures of the two companies. There remains Ford’s history of ham-fisted relations with oriental cultures as any Mazda executive will tell you (off the record). Toyota remains the world’s largest automaker with Ford trailing in a distant fourth place. The companies remain arch rivals.

Not helping things during the past two years is the Ford P.R. practice of continually promoting its fledgling hybrid sales often at the expenses of naming Toyota. In the most recent example of this bashing, Ford Motor said it “set a record for hybrid sales in the second quarter of 2013, with sales of 24,217 vehicles – up 517% compared to last year and up 15% from Q1 of 2013 – as demand grows in markets across the United States and as more Toyota and Honda customers trade in their vehicles for a Ford.”

According to the MOU of 2011, the two companies would use their independently developed hybrid powertrain technology and knowledge on a new co-developed hybrid system, which would be used in rear-wheel-drive light trucks arriving later this decade.

Both companies are heavily invested in fuel-thirsty large trucks, with Ford’s best-selling vehicle, the F-Series pickup, rated at 16 mpg on the EPA city test cycle. F-Series has been the U.S.’s best-selling truck for the past 35 years. Toyota before the Great Recession invested billions in full-size trucks and SUVs. Both the Tundra pickup and Sequoia full-size SUV have been sales disasters since they are selling at volumes far lower than Toyota projected. (Toyota Shows Heavily Restyled 2014 Tundra Pickup at CAS, RAM 1500 Beats F-150 and Tundra in CR Pickup Test, Light Duty Diesel Ram Ups Fuel Economy Ante in 2014, New GM Pickup EcoTech3 V6 Rated at 24 and 22 MPG)

The 2011JV release issued by Ford, said that both companies have been working independently on their own future-generation rear-wheel drive hybrid systems, but would now collaborate as “equal partners.” General Motors of course has been offering a hybrid system on its larger pickup trucks and SUVs for years now – with little to no consumer acceptance.

Ford and Toyota claimed their collaboration would allow them to bring these hybrid technologies to customers sooner and more affordably than either company could have accomplished alone.

As to telematics, Ford and Toyota also agreed back then to work together on “enablers” to complement each company’s existing telematics platform standards, helping bring more Internet-based services to consumers globally. Recently, Ford customer satisfaction has plummeted because of owner complaints about a badly designed MyFord Touch telematics system. Toyota, behind in telematics, which is not necessarily a disadvantage since to the pioneers go the Indians, is rolling out its Entune system.