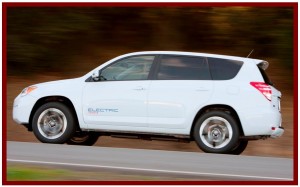 Canadian taxpayers are subsidizing the production of the Toyota electric vehicle.

It was a blow to former NUMMI associates in Fremont, California whose UAW plant was shut down by Toyota last year. It was hoped that production of the fully electric version of the RAV4 would go into the plant when Tesla bought it in 2010. At the time some industry insiders thought that the joint program with Toyota on the EV was nothing more than an image cleaning effort by Toyota after it shut its only unionized plant in the U.S. Toyota owns a small stake in Tesla, and Tesla has previously said that a Model S electric sedan will go into production at Fremont sometime during 2012. Tesla’s latest financial results showed a $59 million loss for Q2 – in a losing streak that goes back to Tesla’s founding in 2003. Tesla went public in 2010.

Toyota will pay Tesla about $100 million to supply the electric powertrain, which includes the battery, motor, gearbox and power electronics for the RAV4 EV. Tesla will build the electric powertrains at its production facility in Palo Alto, California and then ship them to TMMC for final assembly into the vehicle.

Both the Canadian Federal and Ontario provincial governments are contributing about $140 million to Toyota for refurbishing its plants in Cambridge and Woodstock under the name Project Green Light. Toyota will use some of the government money to build the RAV4 EV along with the gasoline powered version. 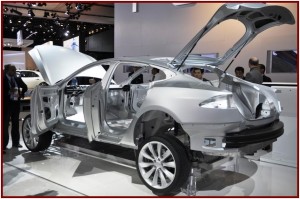 “The Tesla-Toyota joint development team has agreed that building the vehicle at the Woodstock plant on the same line as the gasoline-powered RAV4, will streamline and simplify the production process and guarantee the highest level of quality control,” said Ray Tanguay, TMMC Chairman, who hosted Canadian officials at the plant today and thanked them for their support.

The RAV4 EV will be sold at U.S. Toyota dealers through Toyota Motor Sales, U.S.A., Inc. (TMS). Details including pricing, volume and regional distribution will be determined and announced at a later time, Toyota said in a statement.

The RAV4 EV is one of several advanced-technology coming for Toyota. (Toyota previously sold an electric version of the RAV4 from 1997-2003 with limited success.) In addition to expanding the Prius family with the upcoming Prius V and Prius Plug-in Hybrid, Toyota will introduce an electric version of the Scion IQ in 2012 and a Hydrogen Fuel Cell Hybrid Vehicle by 2015.