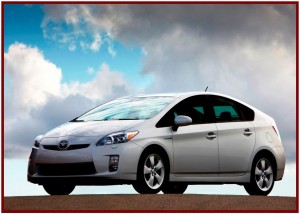 Toyota is introducing 21 hybrid models by the end of 2015, but they will be met in the marketplace by new hybrids from all major automakers.

The golden glow of the hybrid effect keeps on building for Toyota Motor with its third successive top ranking in the Best Global Green Brands report just published.

The annual report gauges the gap between public perception of a brand’s environmental performance – its “green image” – and its actual environmental practices, using what is publicly available data and information. Ford and Honda completed the top three spots in this year’s report.

More than 10,000 consumers around the world recognized Toyota for its investment in products, such as Prius, and its programs for reducing greenhouse emissions, energy consumption and water usage throughout its operations. The survey result is not surprising since Toyota has sold more than 5 million hybrid vehicles globally, including almost 3 million Prius models, far above any other automaker. Toyota is introducing 21 new or updated hybrid models by the end of 2015, but they will be met in the marketplace by new hybrids from all major automakers, as they belatedly embrace the fuel-efficient technology.

This assessment from Interbrand is not without self-interest since it makes money from its consultancy, which it boasts is the world’s leading supplier of advertising campaigns. Each brand’s perception score is determined through a consumer study covering over 10,000 respondents; over 1,000 in each of the 10 largest economies, including the US, Japan, China, Germany, France, UK, Italy, Brazil, India, and Russia. More than 1,200 consumers, using Interbrand’s six external brand strength pillars, assess each brand for Authenticity, Relevance, Differentiation, Consistency, Presence, and Understanding.

Ken Zino is an auto industry veteran with global experience in print, broadcast and electronic media. He has auto testing, marketing, public relations and communications expertise garnered while working in Asia, Europe and the U.S.
View all posts by Kenneth Zino →
This entry was posted in environment, marketing and tagged autoinformed, autoinformed.com, green marketing, hybrids, interbrand, Ken Zino. Bookmark the permalink.