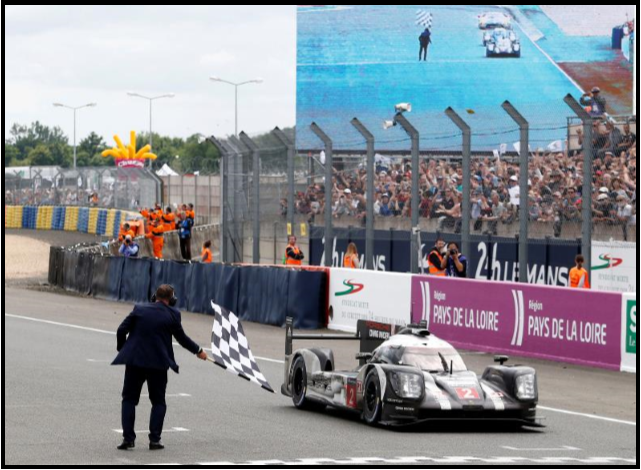 With a Toyota TS050 leading the Le Mans race by consistently running fast laps, the LMP1 hybrid stopped on the track during the second to last lap – with  just minutes of the race remaining. Despite driver Nakajima nursing the car around the 13.6km track for one more lap, it took 11m53s, which exceeds the regulation maximum of six minutes. The car was therefore unclassified. Thus the Toyota losing streak at Le Mans continues.

The #2 Porsche 919 Hybrid of Romain Dumas (FR), Neel Jani (CH) and Marc Lieb (DE) took the checkered flag first after 384 laps in front of some of the 263,000 spectators. In the end Porsche had more endurance.

The race, arguably, was one of the most intense in Le Mans history, with three cars – two Toyota’s and a Porsche – contending for the entire 24 hours. The weather, which wreaked havoc with the second and third rounds of qualifying, made those sessions meaningless, was benign. Well, benign in Le Mans terms – except for the starting first hour delay, which the field lapped behind the safety car as rain cleared. 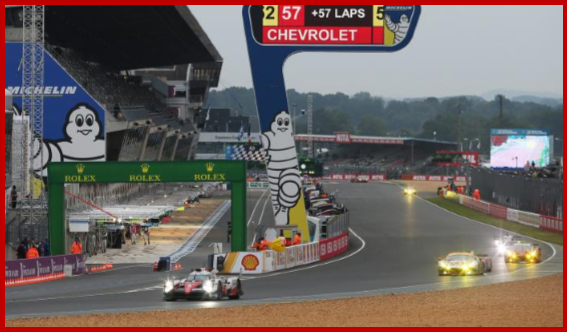 Eventually finishing second – 3 laps down – was the #6 Toyota of Stephane Sarrazin, Kamui Kobayashi and Mike Conway, four laps behind the winner.

Audi was able to maintain its record of always finishing on the podium since its debut at Le Mans in 1999. However, both Audi cars suffered technical issues during the race, with the #8 having fewer than the #7, but both cars were far from the quality and endurance of the Audi’s of past wins, finishing 12 laps down and 17 laps down respectively.

Both Toyota TS050 Hybrids took turns to lead the race as part of a battle with the #2 Porsche, and was winning with the #5 crew of Anthony Davidson, Sébastien Buemi and Kazuki Nakajima before the late disaster. Better fuel efficiency from the TS050 Hybrid allowed it to complete 14 laps per run, while its rivals pitted one lap earlier. That reduced the number of stops required and contributed to the battle for the win.

“That was an unbelievable end to such a difficult race,” said Anthony Davidson. “You couldn’t have written the way it ended; no-one would ever have believed a movie if it ended like this. So to actually live through the experience is pretty hard to take, but it will make us stronger and we’ll be back.”

Audi took positions three and four. The only LMP1 Privateer to finish the race was the #12 Rebellion Racing R-One AER of Nick Heidfeld, Nicolas Prost and Nelson Piquet Jr, which finished 29th overall.

Ken Zino is an auto industry veteran with global experience in print, broadcast and electronic media. He has auto testing, marketing, public relations and communications expertise garnered while working in Asia, Europe and the U.S.
View all posts by Ken Zino →
This entry was posted in racing and tagged 2016 Le Mans, autoinformed, autoinformed.com, Ken Zino, lmp1. Bookmark the permalink.