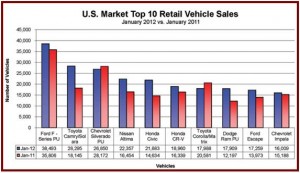 It's the same old "sins of the past" script - Detroit sells trucks and the Japanese dominate with their fuel efficient, high quality cars in spite of increasingly competent Detroit Three offerings.

U.S. January auto sales at the Japanese Big Three automakers showed strong gains in January led by well known mainstay sedans and crossover vehicles that have once again proven to be durable and formidable competitors to Detroit’s slowly increasing competency in the respective segments.

The seasonally adjusted annual selling rate – SAAR – was a surprisingly strong 14.1 million units, and thus far above consensus forecasts that 2012 will see sales of 13.5 million retail vehicles. How this plays out remains to be seen as one month does not a sales trend make. Nonetheless, the Japanese remain well positioned in the changing U.S. market.The overall market for new vehicles wasn’t as strong as the numbers or the media portrayed. Sales to fleets in rose nearly 33% from a year ago. January fleet sales were also up more than 28% from December 2011. This fleet SAAR translated to 3.2 million units, which was up significantly from both January 2011 and from last month. This is largely a Detroit Three problem as offshore makers have limited fleet sales.

Toyota Motor Sales was – as usual – solidly in first place among Japanese companies with 124,540 vehicles sold, followed by Honda at 83,000, and Nissan North America just behind at 79,313 units.

Toyota was therefore once again Number Three overall in U.S. sales having displaced Chrysler Group last fall as Toyota, Lexus and Scion inventories rebuilt post natural disasters. Worth watching during Q1 is Toyota, which was a mere 12,000 vehicles behind Number Two Ford Motor. Toyota truck production in the U.S. – the last to recover from last year’s natural disasters – still has not caught up with demand. When it does – and Toyota’s pickup truck plant in Texas has been working overtime since late last year – Toyota could easily surpass an underperformed Ford in U.S. sales.

In another cut with a Samurai’s sword, Toyota’s luxury division, Lexus,with sales of 12,274 vehicles easily outsold Ford’s moribund Lincoln, which posted 5,221 in sales, as Lincoln increasing looks like a hobby not a business. Lexus production too is still recovering from the Japan earthquake, so Ford is facing challenges on two fronts.

Strong sales of the Toyota Camry and Camry hybrid at 28,295 units led the way. Competitors take note projected Camry Hybrid volume will continue to grow this year to about 50,000 units. The Nissan Altima, the industry’s second-best selling passenger car in 2011 behind Camry, increased 36% to 22,357. Honda, with a new Accord due later this year, had a blowout month with its all-new CR-V, which set a January record of 18,960, up 16% from last year’s record-setting 16,339. The Civic, now that dealers have an adequate supply, also continued to grow with sales of 21,883 – even though the media have panned the lightly revised car. As to the aging Accord, it posted January sales of 13,659, up 1.5% from the same period last year.