Posted on 3 October 2012 by Kenneth Zino 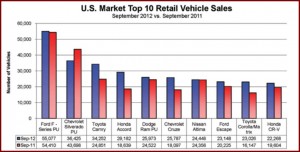 Only one Detroit car – Cruze – made the Top Ten list.

Two of the Japanese Big Three, Toyota and Honda, recorded impressive sales increases in September, as Nissan hit a wall. American Honda was up 31% compared to last September with sales of 117,000 Acura and Honda vehicles. Toyota Motor sales – with a one-two-three punch of Toyota, Lexus and Scion brands – reported September sales results of 171,910 units, an increase of 41.5%.

Both of these Japanese makers because of their sales of cars with high residual values and therefore low lease rates far outpaced the overall market, which grew at 13% to a Seasonally Adjusted Annual Selling Rate or SAAR of almost 15 million vehicles, the highest since the 2008 Wall Street implosion. 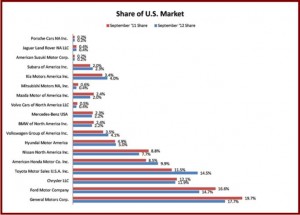 The Detroit Three, while now healthy, are still suffering from their bad small car quality sins of the past.

Worrisome for competitors were increases in market share of 2.6% at Toyota (to 14.5%), and 1.2% at Honda (to 9.9%) when looked at year-over-year, according to AutoData. General Motors still leads in the U.S. with a 17.7% share, but a resurgent Toyota is now close to surpassing Number Two Ford with its 14.7% share. (Chrysler is currently fourth at 11.9% share). Each percentage point in share – as long as it isn’t bought with low pricing – is worth roughly $1 billion dollars in profits, according to an old industry rule of thumb. Left as road kill was Nissan whose share dropped more than 1% (7.7%) with sales of 92,000 units. 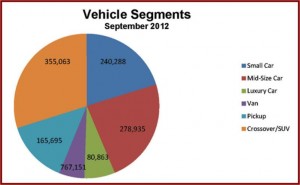 Much of the offshore brand performance had to do with segment shifting because of $4 a gallon gasoline prices. The small car segment – traditionally a weak one for the Detroit Three – saw the largest growth, with sales soaring 50% compared to September 2011. Small cars accounted for 240,288 units, up from 160,334 sold in the same month last year. The midsize car segment sold 278,935 vehicles, an increase of 15.8% year-over-year, also a Japanese stronghold. Nonetheless, the SUV/crossover segment remains the largest with sales of 355,063 vehicles – an 8% increase from the same month last year.

“Home prices, consumer confidence, and credit availability are all on the rise,” said American International Automobile Dealer Association President Cody Lusk. “Americans are buying cars again, and that’s good news for dealers, their employees, and the communities they support.”