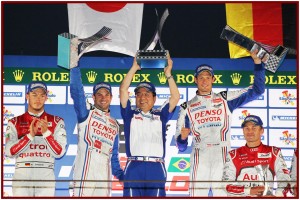 “To stand on the top step of the podium has been our dream and to achieve this is only our third race is a dream come true,” said Yoshiaki Kinoshita, Team President.

A Toyota hybrid turned in a dominant performance at the Six Hours of Sao Paulo this weekend by going from the pole to first place during the fifth round of the FIA World Endurance Championship. It was the first overall win this year for the new hybrid racing team, which challenged Audi’s clear dominance in endurance racing by showing up at Le Mans last June, a year ahead of announced plans. Unfortunately at Le Mans one Toyota hybrid was knocked off the course by an inept amateur, while the other broke. Both were arguably competitive. In that 24-hour race marred by accidents, two Audi diesel-engine hybrid P1 cars took first and second, with a another Audi in third. It was Audi’s 11th Le Mans victory.

Not this time around the track though. Toyota got both reliability and fuel consumption just right and stayed out front as Toyota drivers Alex Wurz and Nicolas Lapierre started from the inside of the front row in a TS030 hybrid and took the checkered flag. The win is Toyota’s first victory in an FIA world championship race since the 1999 Rally of China. It is 20 years since victory for the TS010 at Monza in 1992, Toyota’s last success in international endurance racing.

As expected Audi was in the mirrors of the #7 Toyota racecar the entire way. The Le Mans winners Marcel Fässler/André Lotterer/Benoît Tréluyer in the Audi R18 e-tron quattro finished as the runners-up behind Toyota and in front of teammates Lucas di Grassi/Tom Kristensen/Allan McNish in the Audi R18 ultra. This ended an Audi streak of endurance sports car victories that began in March, but still leaves Audi well ahead in championship points for the eight-race season.

The fastest LM P1 class (Le Mans Prototype 1) saw the emergence of kinetic energy recovery systems (KERS) this year. Storage capacitors (Toyota) or a flywheel (Audi), return energy the wheels of the racecar. To be considered as a hybrid, an LM P1 must be able to move the entire length of pit lane at 60 km/h using only its KERS.

The key to success here is using the additional power to accelerate out of the turns or for improving fuel economy, thereby limiting pit stops or a combination of both. At Audi, recovered energy is fed to the front wheels of the car, which must be running above 120 km/h for the transfer to take place. For Toyota, on the other hand, the energy is fed to the rear wheels and there is no minimum speed, according to the rules , which appear to be designed to return the top class of racing to rear-wheel drive to attract more automakers.

Audi was gracious in defeat. “Congratulations to Toyota on an absolutely flawless race. Our cars ran longer on one full fuel tank, but Toyota was faster on average and did a better job of handling the tires,” said Ralf Jüttner Technical Director Audi Sport Team Joest.

“We made no mistakes, the stops were good, all drivers were quick… But driving without making any mistakes and then not winning obviously can’t be our goal. We’ve got to try and improve.”

Audi has been dominate at Le Mans in recent years, winning 11 races outright, which means Audi now has two more victories than Ferrari, although Porsche still holds the factory record with 16 and has announced a return to endurance racing in a couple of years.