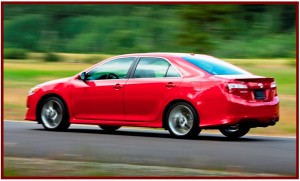 About 15 million Camrys have been sold in more than 100 countries since the car debuted here in the U.S. when it replaced the Corona in 1983. Almost 10 million have been sold here.

A beleaguered Toyota Motor Corporation is counting on a revised 2012 Camry sedan to brush aside safety and quality concerns that have haunted it for the past two years. These, along with the production disruptions from the Japan earthquake, will relegate Toyota to the third largest automaker in the world for 2011 after it assumed the number one spot in 2008 and held it for three years as General Motors imploded.

The Georgetown, Kentucky built Camry mid-size sedan – with roughly 80% North American content – can also go a long way toward overcoming the devastating effects of the strong Japanese Yen, which is hurting Toyota’s profits. 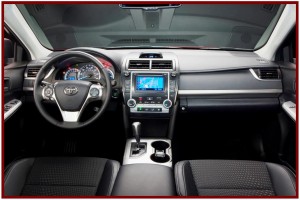 While all basic dimensions of the Camry are essentially unchanged, a higher trunk lid adds some storage space. The sheet metal is cleaner and more angular than the current car. The real advances are hidden underneath in the powertrain. Camry’ now comes with 2.5-liter four-cylinder engine that is smooth and quiet. The 178-horsepower engine with a six-speed automatic transmission is predicted to deliver a best-in-class 35 miles per gallon on the EPA highway cycle. That’s one more horsepower than the 2.4-liter i-VTEC four-cylinder engine in the Honda Accord LX, LX-P and SE Sedans – in marketing game, literally of “one upmanship.”

There is also a 268-horsepower V6 that Toyota claims provides improved performance yet mpg will be as good or better than competitors’ V6 and turbocharged four-cylinder engines.

A day of test driving the two engines reveals, once again, that these are formidable powerplants that are almost invisible to the driver under suburban operating conditions. The four-cylinder engine with the six speed automatic is the engine of choice for those who want fuel economy. Returning in December will be the Camry hybrid. Toyota says it will outperform the competition in all areas with a new hybrid system with a 2.5-liter four-cylinder engine that delivers 200 horsepower and 43 miles per gallon in the city. Camry Hybrid LE will be down $1,150 to $25,900. The new XLE hybrid at $27,400 is $800 less than the current hybrid with an upgrade package.

While the Camry is crucial to a Toyota turnaround, Camry will also be followed later this year by the Tacoma, Prius V, Yaris and Scion iQ. Next year Toyota adds the smaller Prius C, a Plug-in Prius, Scion FR-S and RAV4 EV, along with several other “all new” but as yet unspecified models. The competition that Toyota will present to competitors is good news to buyers since it will likely lead to decreased prices or larger incentives in the most competitive segment in the U.S., which accounts for 20% of auto sales.