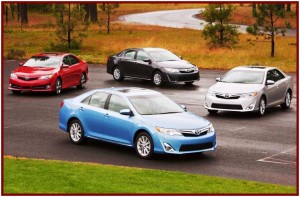 Toyota again leads the environmentally friendly/green category, no doubt driven by the Prius and other hybrids, helped by expensive marketing and incentives.

The difference noted by U.S. consumers among car brands is shrinking, but Toyota continues to lead all automakers in overall consumer perception. Toyota, Ford, Honda, and Chevrolet have been consistent winners in Consumer Reports annual Car-Brand Perception Survey, and true to form this year they all maintained their top positions, However, they all have seen their ratings decrease, with most of the major brands recording double-digit decreases in total scores.

What this really means to auto marketers is unclear as automakers are facing another tough year in the U.S. as the economy languishes and long-term unemployment remains at record highs not seen since the Great Depression. Preliminary sales data for January indicate another weak month for automakers who are now watching brand reputations level out.

Toyota continues to dominate overall in brand perception; although it slipped what CR says is a significant 17 points, compared with last year’s survey results. Other top brands, Ford, Honda, and BMW, saw their scores drop more than 20 points. The two leading General Motors brands, Cadillac and Chevrolet, did relatively better with only single-digit decreases.

Respondents said the most important factor in car buying continues to be safety (65%). The leading brands in overall perception in Consumer Reports survey typically excel in multiple categories. Chinese owned Volvo, however, has maintained a top 10 spot for years by virtue of its safety reputation alone. This year, though, Volvo dropped 21 percentage points from last year’s 70% to 49%.

Complicating automotive marketing of safety benefits is the fact that so many vehicles are now at or near the top of various safety rating systems from the government or insurance industry. (See IIHS Posts a Record 115 Winners for 2012 Top Safety Pick)

CR, which completely missed Toyota safety and quality problems in its ratings, noted that Toyota had suffered in reputation from its huge unintended acceleration and quality recalls and NHTSA fines of two years ago. But in the latest results, Toyota has remained consistent at 13%, year over year, which raised it to third place because of the other brands’ decreases.

As in other areas, Consumer Reports survey found scores edging downward in the quality factor, with Toyota, Honda, and Ford now sharing a three-way tie for the top spot and the top brands in general having less of an advantage in perceived leadership. Honda lost six percentage points, while Toyota holds at 19 percentage points.

Toyota again leads the environmentally friendly/green category, no doubt driven by the Prius and other hybrids, as well as some creative marketing. The brand did drop eight percentage points, but it still led. Smart made a surprise showing this year, debuting in the top five, despite having no new products or a competitive advertising budget. Honda again claimed the third position in the green rankings.

Ford slipped this year, despite introducing the new Fiesta and Focus small cars and backing them with highly visible marketing campaigns that included social media efforts and television show placements.

And radical environmentalist should take note that after a year of headlines and marketing espousing the allegedly green Chevrolet Volt and Nissan Leaf, neither brand benefitted form it.  Chevrolet remained consistent with 12 percentage points. Nissan picked up about two percentage points, rounding to eight percent.

The Consumer Reports National Research Center conducted a random, nationwide telephone survey of 2,045 adults from Dec. 1-5, 2011, and collected survey data from 1,702 adults in households that had at least one car.

Overall brand perception is an index calculated as the total number of times that a particular make was mentioned as exemplar across all seven categories, divided by the total unaided awareness of the brand. (Interview subjects were asked what brands exemplified the traits, instead of being read a list of brands.) Category scores reflect the number of times that the particular make was mentioned as an exemplar of the particular attribute, again corrected for awareness