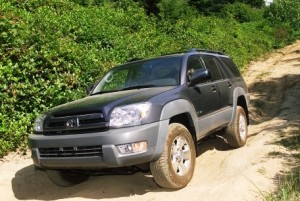 The 4Runner matter was actually the forerunner of NHTSA's problems with Toyota defects.

Toyota Motor Corp. will pay $32.425 million in civil penalties as the result of two Department of Transportation Investigations into safety defects it was announced late last night by DOT.

The additional penalties are on top of a previous fine of more than $16 million for how the Japanese company handled safety recalls after initially denying safety defects existed. All of the fines are the maximum amount permitted under law, one that critics want changed since the amounts are too low to deter multinational corporations with billions in profits.

Toyota will pay $16.375 million in one pedal entrapment case and $16.050 million in another steering rod defect in response to the DOT’s charges that Toyota failed to comply with the requirements of the National Traffic and Motor Vehicle Safety Act for reporting safety defects to the National Highway Traffic Safety Administration (NHTSA), which is part of DOT.

The first investigation completed yesterday resulted in a $16.375 million fine. This was about Toyota’s recall of nearly five million vehicles with accelerator pedals that can become entrapped by floor mats. As its initial fix for the safety defect, Toyota recalled 55,000 all-weather floor mats on September 26, 2007.

However, in August 2009, a fatal crash in Santee, California occurred as the result of pedal entrapment in a Lexus that was equipped with an all-weather floor mat intended for another Lexus model. After the fatal crash that killed a California Highway Patrol office and three members of his family, NHTSA said it reviewed crash evidence and other data, and found that removing floor mats was insufficient and that there was a need to redesign the accelerator pedal. At NHTSA’s insistence, Toyota then conducted a recall for 3.8 million Toyota and Lexus vehicles for floor mat entrapment on October 5, 2009. The October recall was expanded on January 27, 2010, to include another 1.1 million vehicles.

It was common practice for Toyota and Lexus dealers to “pack” new cars with what were optional mats, forcing customers to buy them.

In February 2010, NHTSA launched an investigation to determine when Toyota first learned of the pedal entrapment defect and whether the company notified NHTSA in a timely manner. Federal law requires all auto manufacturers to notify NHTSA within five business days of determining that a safety defect exists and then to promptly conduct a recall. NHTSA’s investigation led the agency to believe that Toyota had not fulfilled its obligation to report a known safety defect within five day.

The defects involving pedal entrapment by floor mats and “sticking” accelerator pedals are currently the only two known causes of unintended acceleration in Toyota vehicles, although NHTSA continues to explore other possible causes, including electronic glitches in the drive by wire systems. The agency has enlisted the expertise of researchers and engineers from the National Academy of Sciences and NASA for a pair of studies that seek to get to the bottom of unintended acceleration.

The second investigation yesterday resulted in a $16.050 million fine. In that case, NHTSA investigated whether Toyota properly notified the agency of a safety defect in several Toyota models that could result in the loss of steering control. In 2004, Toyota conducted a recall in Japan for Hilux (4Runner in U.S.) trucks with steering relay rods prone to fatigue cracking and breaking, causing the vehicle to lose steering control.

At that time, Toyota informed NHTSA that the safety defect was isolated to vehicles in Japan and that the company had not received similar field information within the United States. In 2005, however, Toyota informed NHTSA that the steering relay rod defect was present in several models sold in the U.S. and conducted a recall for nearly one million vehicles. Then, in May 2010, NHTSA was alerted to additional information, including complaints from U.S. consumers, that Toyota had not disclosed when Toyota initially notified NHTSA that a U.S. recall was unnecessary.

“Automakers are required to report any safety defects to NHTSA swiftly, and we expect them to do so,” said NHTSA Administrator David Strickland. “NHTSA acknowledges Toyota’s efforts to make improvements to its safety culture, and our agency will continue to hold all automakers accountable for defects to protect consumers’ safety.”

Last April, Toyota agreed to pay the maximum penalty of $16.375 million in response to the Department’s assertion that it failed to notify NHTSA within five days of learning of the “sticky pedal” defect. That brings the total civil penalties assessed for Toyota in 2010 to $48.8 million. The fines will be paid into the Treasury Department’s General Fund.

1 Response to Toyota Motor Fined Another $32.425 Million for Safety Defects