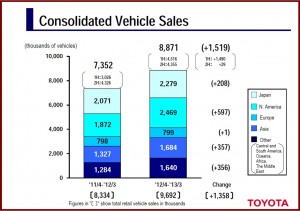 Toyota Motor Corporation is back in shape after several years of disappointing results.

Toyota Motor Corporation said profits for its fiscal year that ended 31 March reached ¥962.1 billion or $9.7 billion, up from $2.8 billion the year before. Vehicles sales in the U.S. and a weaker Japanese Yen – off -20% in the last quarter – sent profits soaring to more twice that of the second largest automaker, General Motors at $4.9 billion for 2012.

This was the best annual return in five years for the world’s largest automaker, and a clear indication that the recalls of ten million vehicles during 2009-2010 and the product shortages from natural disasters in 2011 are now behind it. 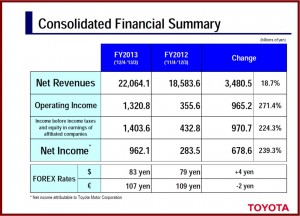 “Toyota has learned a lot through our concerted efforts to overcome various difficulties in the last four years, said Akio Toyoda, CEO.

“As a result, have we really turned into a company that is able to be profitable and continue to grow no matter what happens to its business environment? Not sure yet, is my honest answer,” said Toyoda.

Overall TMC sales at $223 billion (¥22 trillion) increased 18.7%. While sales increased everywhere to 8.87 million vehicles, it was North America where Toyota posted its most significant gains at 2.47 million, an increase of 32% compared to the previous fiscal year. Asia at 1.68 million vehicles posted a 27% increase.

In Japan, vehicle sales totaled 2.279 million units, an increase of 207,997 units compared to the previous fiscal year. Operating income from operations in Japan increased by ¥783.3 billion   to ¥576.3 billion.

In Central and South America, Oceania and Africa, vehicle sales totaled 1.64 million units, an increase of 356,516 units, while operating income increased by ¥24.9 billion to ¥133.7 billion. 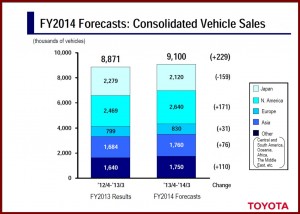 “We have faced many challenges since 2009 but have learned valuable lessons, including the need for Toyota to maintain sustainable growth,” said Akio Toyoda.

In North America, a new third-generation Lexus IS sedan aimed directly at the BMW 3-Series that is just going on sale, as well as a new version the perennial best-selling Toyota Corolla compact in the fall will help boost sales.

Ken Zino is an auto industry veteran with global experience in print, broadcast and electronic media. He has auto testing, marketing, public relations and communications expertise garnered while working in Asia, Europe and the U.S.
View all posts by Kenneth Zino →
This entry was posted in auto news, financial results and tagged autoinformed, autoinformed.com, corolla, Ken Zino, lexus is, toyota motor. Bookmark the permalink.