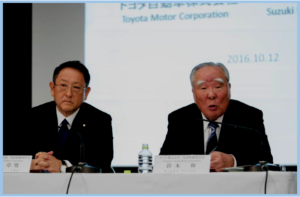 Toyota Motor Corporation is undertaking a series of tactical business moves that will allow it to develop advanced driver assistance technologies, expand its market presence globally and spread out its research & development costs, particularly in information technology.

The latest developments come as Toyota is once again battling what is now a beleaguered, wounded Volkswagen Group for the world’s biggest car company title. The moves reflect a growing problem at all automobile companies. How do you pay for the cost of moving forward in a world with increasingly stringent safety and emissions regulations, web enabled cars,  as well as the entire future of automobility and autonomous vehicles?

Denso Corporation, Fujitsu Limited, and Toyota have reached a basic agreement to “start consideration of changing the capital structure of Fujitsu Ten Limited,” in which the three companies have holdings. “A review will be conducted to determine the specific changes, and the companies plan to reach a final agreement by the end of fiscal year ending 31 March 2017.” What appears to be going on here is a cooperation between the companies in developing in-vehicle ECUs, millimeter-wave radar, advanced driver assistance / automated driving technologies, and basic electronic technologies, among others. Basically Denso and Toyota are taking over control of Fujitsu.

In another move with far reaching implications, Toyota and Suzuki will “explore business partnership” that sounds like a Toyota takeover of mini-vehicle maker Suzuki, which admits that it doesn’t have the capital to keep up with technological changes in the auto industry. Suzuki’s large presence in India could be a jewel in the Toyota crown.

“We would like to always keep our doors open for new partnership opportunities, which will contribute to the making of ever-better cars as well as to the development of the automotive industry,” said Akio Toyoda, President of Toyota. AutoInformed translation / prediction: Toyota is cutting costs while increasing its ownership in the automobile business.

The Toyota Suzuki move mirrors the announcement earlier this month (Honda to Make Small Gas and Electric Scooters for Yamaha) that Honda Motor and Yamaha Motor are in discussions over a possible business alliance in the Japanese market in the “Class-1 category,” which include scooters with a 50cc engine or electric motor. Because of the diversification of the types of short-range transportation, including power-assisted bicycles and mini-vehicles, the market for scooters in Japan has been shrinking in recent years. Honda will supply tiny cars to Suzuki. Eventually, AutoInformed opines Honda will take over its rival motorcycle maker.

“The environment surrounding the automotive industry has been changing drastically and rapidly in an unprecedented fashion.” Suzuki and Toyota said in a joint statement. “As such, the industry is required to work not only on conventional automobile R&D, but also on R&D for advanced and future technologies in the fields including environment, safety, and IT. In addition to the R&D that is conducted by individual companies, it is increasingly important to work together with other companies on areas such as infrastructure development, as well as the establishment of new industrial standards.”

Osamu Suzuki, Chairman of Suzuki, said, “Toyota is the industry-leading, and the most reliable company which is actively working on various advanced and future technologies. I am appreciative that Suzuki is able to start discussions with Toyota to explore ideas on a partnership. I first spoke about this possibility with Toyota’s Honorary Chairman Shoichiro Toyoda, and am very grateful that  has also showed an interest. We will proceed with discussions for the future of Suzuki.”