Toyota Moves East out of Euro Zone to Build Next Corolla 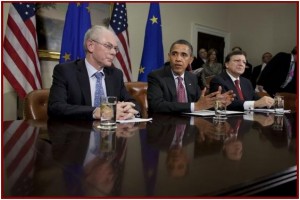 Toyota is restructuring its European manufacturing operations to consolidate production of small cars at its UK plant by removing assembly of the Aurus – Corolla – hatchback models from Toyota’s plant in Turkey.

In the place where Aurus models are now assembled in Turkey, Toyota said it will produce its new version of the C-segment sedan at Toyota Motor Manufacturing Turkey (TMMT) within two years. Toyota said that as many as 1,500 jobs in UK and 400 in Turkey will be created by the €265 million investment.

Neither country uses the Euro currency, which is crumbling in value as Euro Zone crisis continues to grow, while EU leaders bicker over what steps to take about unsustainable, Greek, Italian and Spanish debt. So far the Greek and Italian governments have fallen, and serious questions are being raised about the political stability of the Spanish and French Governments.

President Obama today met with a group of senior officials from the European Union and – ignoring the advice of our founding fathers about European entanglements – said the “United States stands ready to do our part to help them resolve this issue.”

The Euro Zone crisis has negative implications for American taxpayers, who still own 500 million shares or a 26% stake of General Motors, the world’s largest automaker, since General Motors is losing money in Europe.

Ford Motor, which is the recipient of $5.9 billion in taxpayer subsidized loans, is also losing money and market share in Europe.

Fiat, the owner of Chrysler, is also in trouble, as Fiat expects losses in Europe of -€800 million with Italian car sales expected to reach a 30-year low. Fiat earnings are now being improved by results at Chrysler in the U.S., which of course only survived because of a taxpayer bailout.