Toyota North American Production Back to 100% in September 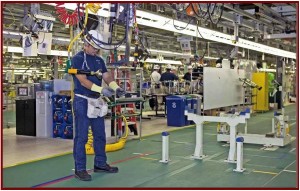 What's missing in this picture? It only takes one piece out of tens of thousands to stop production.

Toyota production in North American is expected to return to 100% in September, Toyota said in a statement. Production has been disrupted following the 11 March Japan earthquake and tsunami in Japan.

All of the Detroit Three automakers – GM, Ford and Chrysler – clearly outsold the Japanese Big Three – Toyota, Nissan and Honda – in May as a result of the marketplace chaos. The largest Japanese automaker Toyota – also the most dependent on imports to the U.S. – saw decreases of 33% across its brands to 108,387 vehicles compared to a year ago.

The Toyota Division posted May total sales of 96,082 units, down 32%.The Lexus Division reported total sales of 12,305 units, down 45% compared to the same period last year. Total light vehicle sales declined almost 4% for all makers on average during the month.

On average, current Toyota production will return to more than 80% through August.  Eight of the company’s 12 North American-built models returned to 100% on 6 June.

On a global basis, Toyota forecasts a drop in earnings of ¥350 billion to ¥280 billion (~$3.5 billion) for the year. Global vehicle sales might drop to 7.24 million from 7.308 million last year. It is a serious reversal from the ¥408 billion earnings posted a year earlier when Japan’s largest automaker was slowly recovering from the global financial crisis and recalls of millions of Toyota and Lexus vehicles for stuck gas pedals and unintended acceleration safety defects.