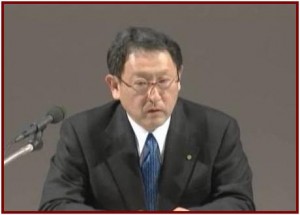 "Because the automobile industry has such a broad base, its effect on others is widely felt. Believing that the sooner the better, our entire company has been working to bring production back to normal, " said Akio Toyoda after the tsunami tragedy.

Toyota Motor Corporation – TMC – is predicting that its calendar year 2012 sales will increase by 20% to almost 8.5 million units, which could allow Toyota to return to the Number One sales title that it held for the past three years, but lost in 2011 as natural disasters wreaked havoc on its plants and interrupted production.

The battle for the global sales title will likely continue for the next few years as TMC’s  2013 projection is for sales 8.95 million vehicles. Volkswagen has set a target of 10 million vehicles by 2018, which would be an all time record for any automaker.

Earlier in December TMC  drastically cut its fiscal year 2012 forecast (though 31 March 2012) based on the ongoing negative effects of the strong Yen and the production disruptions caused by Thailand floods and the Japan earthquake and tsunami. As a result, Toyota has revised down its 2012 full year profit forecast by -¥250 billion to ¥200 billion. See Toyota Cuts 2012 Forecast as Yen and Thailand Floods Hurt