Posted on 9 November 2011 by Kenneth Zino 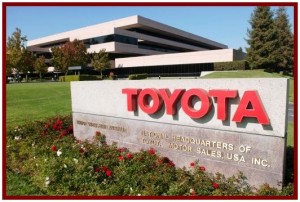 Toyota Motor Sales today announced that it will conduct a safety recall involving approximately 283,200 Toyota and 137,000 Lexus vehicles to replace the crankshaft pulley on the V6 engine. No other Toyota or Lexus vehicles or these Toyota models with 4 cylinder engines are involved.

The outer ring of the crankshaft pulley may become misaligned with the inner ring, causing noise and/or illumination of the discharge warning light.

If this safety defect is not corrected, the belt for the power steering pump may become detached from the pulley and the driver may notice a sudden increase in steering effort. There are no reports of accidents or injuries related to this condition, according to Toyota.

The Toyota and Lexus vehicles involved in the recall are:

Toyota said that it is working on obtaining the necessary replacement parts. Once the replacement parts have been produced in sufficient quantities, Toyota will send an owner notification by first class mail advising owners to make an appointment with an authorized Toyota or Lexus dealer to have the crankshaft pulley inspected and if necessary, replaced at no charge as is required by U.S. safety regulations. The owner notifications will be mailed by first class mail beginning in January, 2012.

Toyota warns that if an abnormal noise is heard coming from the engine compartment, the owner is asked to make an appointment with any Toyota or Lexus dealer to have the vehicle inspected for this safety defect

Detailed information and answers to questions are available to customers at