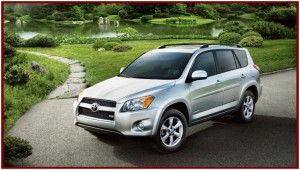 Fined record amounts by NHTSA for previously covering up safety defects, Toyota is now recalling vehicles before a fix is available for its customers.

Toyota Motor Sales is recalling 2006 to early 2011 model year RAV4 and 2010 model year Lexus HS 250h vehicles sold in the U.S. because the rear suspension can fail, leading to loss of control. In a statement notable for its lack of detail about accidents, injuries and fatalities, TMS said that about 760,000 Toyota RAV4 and 18,000 Lexus HS 250h models are involved in this latest quality problem. Toyota did not respond to requests for more information about the Canadian-built vehicles. NHTSA opened an investigation after consumer complaints back in June (.PE12-013.) Toyota at the time told NHTSA it was monitoring complaints even though it had received reports of at least one vehicle accident.

Toyota said that if the nuts on the rear suspension arm are not tightened following the proper torque specification during a rear wheel alignment, “excessive play may occur at the threaded portion of the arm, followed by rust formation.” Then, the threaded portion of the rear suspension arm may wear and cause the arm to separate.

Toyota said it currently has no fix for the problem. Detailed information and answers to questions are available to customers at www.toyota.com/recall and the Toyota Customer Experience Center (1 800-331-4331) or www.lexus.com/recall and Lexus Customer Satisfaction (1 800-255-3987). Owners may also contact the National Highway Traffic Safety Administration Vehicle Safety Hotline at 1-888-327-4236 (TTY1-800-424-9153), or go to www.safercar.gov.