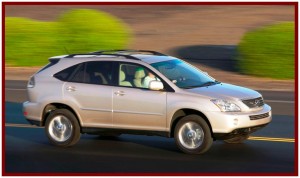 Toyota Motor Sales, USA (TMS) today said that it will recall about 45,500 Highlander Hybrid and 36,700 Lexus RX 400h vehicles sold in the U.S in what appears to be the first recalls for its hybrid drive system.

In a filing with the National Highway Traffic Safety Administration (NHTSA), the Japanese company said that the so called Intelligent Power Module (IPM) located inside the Hybrid System Inverter contains a control board with defective transistors. Transistors on the control boards in some of 2006-2007 model year Highlander Hybrid and Lexus RX 400h SUVs were inadequately soldered and could be damaged from heat caused by a large current flow during high-load driving.

Warning lamps will illuminate on the instrument panel if the safety defect occurs. In most cases the vehicle will enter a fail-safe driving mode, resulting in reduced power in which the vehicle can still be driven for short distances. In some instances, though, the power supply circuit fuse could blow when the transistor is damaged. If the fuse blows, the hybrid system will stop and the vehicle will coast to a stop.

Toyota does not now have replacement parts to conduct the recalls. In the interim, owners of the involved vehicles will be notified of the recall by first class mail in mid-July, 2011.

Toyota will ultimately send a second owner notification by first class mail advising owners to make an appointment with an authorized Toyota dealer to have the IPM inspected and if necessary replaced at no charge as is required by U.S. safety regulations.

Detailed information and answers to questions are available to customers at www.toyota.com/recall and the Toyota Customer Experience Center (1 800-331-4331) or www.lexus.com/recall and Lexus Customer Satisfaction (1 800-255-3987).