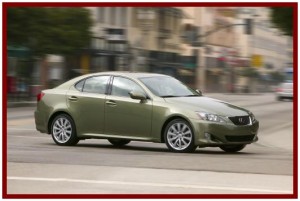 It's also one of the largest recalls ever in Japan.

Toyota Motor Sales (TMS), U.S.A. today announced a safety recall of approximately 245,000 Lexus models because a leaking fuel pressure sensor that could cause a fire.

Toyota Motor Corporation is also conducting a larger recall outside the U.S. for a similar safety defect involving 1.3 million vehicles to fix a different fuel delivery pipe and a high pressure fuel pump check valve. TMC’s recall announcement does not involve vehicles sold in North America, but covers vehicles in Europe and Japan.

Both Toyota recalls are the latest in a series of embarrassing and reputation tarnishing defects at the Japanese company that was once known for its quality among media and owners. Hundreds of fuel leaking complaints have been received, according to Toyota.

In a statement the U.S. sales arm of Toyota said “due to insufficient tightening of the fuel pressure sensor connected to certain engine fuel delivery pipes (those with Nickel Phosphorus plating), there is a possibility that the pressure sensor could loosen over time. If loosening occurs, fuel could leak past a gasket used in the connection between the sensor and the delivery pipe and through the threaded portion of the sensor.”

Lexus dealers will inspect the vehicle for fuel leakage and if no leakage is found, will tighten the fuel pressure sensor with the proper torque. If a fuel leak is found, the gasket between the sensor and the delivery pipe will be replaced and the sensor will be tightened with the proper torque. The inspection and possible gasket replacement will be conducted at no charge to the vehicle owner as is required by U.S. law.

Owners of the involved vehicles will receive a safety recall notification by first class mail once the repair parts are available. Owners can contact the Lexus Customer Satisfaction at 1-800-25 LEXUS or 1-800-255-3987 or at www.lexus.com/recall.