Toyota Reports January Sales up 17%, as it Flings Incentive Gauntlet at Other Automakers with Cash and 0% Interest

Posted on 1 February 2011 by Kenneth Zino 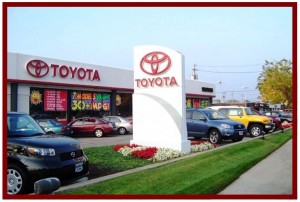 Toyota also announced it was continuing a variety of national and regional sales incentives introduced last December through March of 2011.

“Our intent is to lead the market in incentives,” said Bob Carter, Toyota Division group vice president and general manager, Toyota Motor Sales, U.S.A. This is a distinct departure from past practices at the largest Japanese automaker operating in the U.S.

Toyota will also introduce a new national advertising campaign during President’s Day weekend entitled “#1 for a Reason.” This includes rebates and 0% financing for 60 months across most of Toyota’s core vehicles. As an example there is now $500 cash for the aging Camry – due for replacement late this year – and 0% financing. There will also be loyalty direct marketing program that will provide an additional $500 rebate to current owners.

“Loyalty and conquest rates have returned to historical pre-recall levels,” Carter said, who went on to say Toyota intends to grow at greater than market rates this year, thus flinging the gauntlet at Chevrolet and Ford executives whose brands surpassed Toyota brand in U.S. sales last year.

Toyota was alone among major makers to post flat sales in 2010 as the market grew 11%. It was the most challenging time in the 53-year history of Toyota’s U.S. sales arm. Toyota stopped new vehicle sales in January 2010 to conduct reputation damaging recalls for stuck gas pedals and unintended acceleration safety defects.

Based on preliminary January results, some automakers now appear to be diverging from the recent and almost universal discipline of decreasing incentives as the market slowly recovers.

Toyota Division passenger cars recorded sales of 56,270 units, up 14.7% over last January. Passenger car sales were led by Corolla with sales of 20,581 units for the month, up 20.2% from last January. Camry and Camry Hybrid posted combined January sales of 18,145 units, an increase of 14.9% year-over-year. The Prius mid-size hybrid posted January sales of 10,635 units, up 25.4% over last, as the usually capacity-constrained efficiency champion, benefitted from the end of Japanese market sales incentives, as now excess cars were shipped to the U.S.

Lexus light trucks recorded sales of 7,299 units, down 2.7% from last January. Lexus light truck sales were led by the RX, which posted combined January sales of 5,881 units, up 3.4% over the year-ago month. The GX mid-size luxury utility vehicle reported sales of 1,135 units.