Toyota to Retail Hydrogen Fuel Cell Hybrids in U.S. by 2015 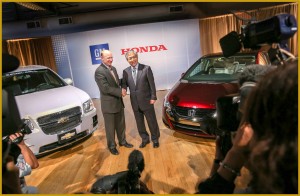 Toyota will sell hydrogen fuel cell hybrids by late 2014 or 2015 in the U.S., according to Bob Carter, Senior Vice President, Automotive Operations, Toyota Motor Sales. Speaking to the Automotive Press Association in downtown Detroit today, Carter said that the new fuel cell hybrid would be revealed for the first time at the Tokyo Motor Show.

Carter told AutoInformed that he has seen and driven the Toyota fuel cell hybrid. The ultimate timing for U.S. retail sales is dependent on California’s hydrogen infrastructure program that aims to put in place 35 hydrogen-refueling centers in the Los Angeles area by 2015.

This light duty fuel cell market has shown promise for decades, but the problem remains it is space age technology at corresponding NASA levels of cost. Not surprisingly, automakers have varying levels of interest in fuel cells that always appears to be just a few years or so from commercialization at $100,000-$400,000 per vehicle. This makes conventional $30,000-$100,000 battery electric vehicles or gasoline hybrids – currently a small fraction of the new vehicle market – look like bargains compared to what automakers would have to charge to make a profit on a fuel cell vehicle.

When hydrogen is used in a fuel cell in electric vehicles, the only vehicle emission is water. However, varying amounts of greenhouse gases are emitted during hydrogen production, and the low-greenhouse gas methods of making hydrogen are more expensive and will need further development to become competitive. Hydrogen fuel cell vehicles could become less costly than the advanced internal combustion engine vehicles of 2050. Fuel cell vehicles are not subject to the limitations of battery vehicles, but developing a hydrogen infrastructure in concert with a growing number of fuel cell vehicles will be difficult and expensive, according to the National Research Council.

“Key Japanese auto OEMs such as Honda, Toyota and Nissan and South Korea’s Hyundai/Kia are preparing their FCEV models for commercialization,” says Vijayendra Rao of Frost & Sullivan. “Cities in Japan such as Tokyo, Osaka, Nagoya, and Fukuoka, as well as Seoul and Ulsan in South Korea are targeted by OEMs for commercialization of fuel cell vehicles.”

The National Research Council report cited above also says that by the year 2050, the U.S. may be able to reduce petroleum consumption and greenhouse gas emissions by 80% from cars and small trucks with a combination of more efficient vehicles, and the use of alternative fuels such as biofuels, electricity, and hydrogen.

The study was sponsored by the U.S. Department of Energy’s Office of Efficiency and Renewable Energy. Not surprisingly, it also calls for “strong government policies to overcome high costs and influence consumer choices.”

NRC notes that improving the efficiency of conventional vehicles is “up to a point” the most economical and easiest-to-implement approach to saving fuel and lowering emissions. A process that is now well underway in the globally transportation industry due market forces as much as increasing stringent regulations and lavish taxpayer subsidies.