Toyota Returns to Le Mans in 2012 with Hybrid LMP1 Racecar 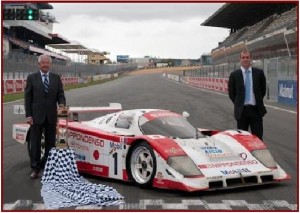 The Toyota 94 CV finished second in the 1994 Le Mans 24 Hours by Irvine-Martini-Krosnoff.

Toyota Motor Corporation (TMC) announced this morning in Tokyo that it will race  in the FIA (Federation Internationale de l’Automobile) World Endurance Championship in 2012, including the Le Mans 24 Hours, with a prototype LMP1 car, the fastest, most expensive class.

Toyota Motorsport’s high-performance technical center in Cologne, Germany, where the chassis has been designed, developed and produced, will be the base for the team.

The Toyota LMP1 racecar will have a gasoline-electric hybrid powertrain developed in Japan. Further details of the program, such as team name, drivers and races, were withheld.

This will be the first year of the international endurance race series created through a link between the FIA and the ACO (the Automobile Club de l’Ouest). It has been thirteen years since Toyota’s last official participation. Porsche has also announced it will return to Le Mans in the top category in 2014. (See Porsche Returns to Le Mans in 2014. Will VW Group Spend Millions to Compete Against Itself with Audi in the Top Class?)

To date, the ACO has run the Le Mans 24 Hours in France, and the Intercontinental Le Mans Cup, with races in Europe, the United States and Asia. In March, the ACO and the FIA announced their partnership and the FIA World Endurance Championship to start in 2012. The inaugural year is expected to feature a series of races in Europe, the U.S. and Asia, in addition to the Le Mans 24 Hours.

“We have competed in Le Mans before, but by using our hybrid technology, our participation in 2012 will be completely new,” said Senior Managing Officer Tadashi Yamashina, who is in charge of Motorsports at Toyota.