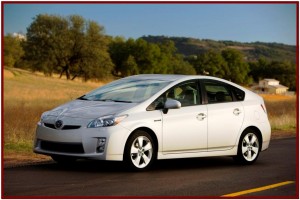 A 50 mpg EPA window sticker is a distinct marketing advantage for Toyota Prius.

Toyota Motor Sales (TMS) U.S.A. today announced the one-millionth sale of the Toyota Prius in the United States. Prius was the world’s first mass-produced hybrid gas-electric vehicle, and in its third generation is unquestionably the most successful hybrid, which continues to give Toyota a halo reputation as an environmentally responsible company.

Sales of hybrids are surging once again in the U.S., led by the 50 mpg Prius, as gasoline prices approach $4 gallon. Prius has accounted for 60% of U.S. hybrid sales so far this year competing at last count against 13 other auto brands that offer hybrids.

“Since the Prius went on sale eleven years ago not a year has gone by when it hasn’t been the number one selling hybrid vehicle in the U.S,” said Bob Carter, Toyota Division group vice president and general manager.

The third-generation Prius topped the EPA’s list of the Most Fuel Efficient Vehicles for 2011. It has been named the Best Overall Value of the Year for the last nine years in a row by IntelliChoice, and has the highest owner loyalty of any mid-size vehicle for four of the last five years according to R.L. Polk.  More than 97% of all Toyota Prii sold since 2000 are still on the road.

Since it was introduced in the U.S. in 2000, Prius, when compared to the average car, has saved American consumers more than an estimated 881 million gallons of gas, $2.19 billion in fuel costs, and 12.4 million tons of CO2 emissions, Toyota claims.

In January 2011 at the North American International Auto Show in Detroit, Toyota debuted the Prius V, the first vehicle to be debuted as part of the Prius family marketing strategy. The Prius V station still is due to go on sale in third quarter of 2011 in spite of the Japan earthquake is a mid-size vehicle that provides more than 50% additional interior cargo space than the current Prius. In early 2012 Prius will launch two more Prius family members – the Prius C compact hybrid vehicle and the Prius Plug-in Hybrid vehicle.