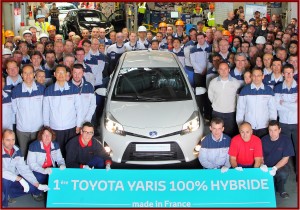 Toyota Motor Manufacturing France has been the home of the Yaris since 2001.

Toyota Motor Manufacturing France began production today of an all-new Yaris Hybrid. This means that TMMF is the first French and first European auto plant to produce full hybrid vehicles for the sub-compact B-segment. The launch is part of Toyota’s overall European strategy to offer full hybrid variants for its entire model range by the 2020s.

To date, Toyota has sold more than 400,000 full hybrid vehicles in Europe, where other automakers lag in the application of the fuel saving technology. Toyota reached that with the sale of the Auris Hybrid and the Prius.  The original Toyota hybrid in Europe was the first generation Prius back in 2000. Since then two new Prius generations have gone on sale and in 2010 the Auris Hybrid, produced at Burnaston, UK, joined Toyota’s European hybrid line-up.

Like the extremely successful Prius c in the U.S. (In the first three days since the small Prius c went on sale it sold 1,201 units, bypassing sales of the much more expensive – two times the price – Chevrolet Volt and Nissan Leaf for the entire month of February.), the Yaris in Europe uses a newly downsized Toyota Hybrid Synergy Drive system. It is designed to offer the same rear passenger occupancy space and trunk (boot) capacity as the standard powertrain model. Yaris hybrid has CO2 emissions of 79 g/km in the European combined cycle and its fuel consumption of 3.1 l/100km in the urban cycle sets a new record in the high volume B-segment.

Toyota Motor Manufacturing France, in Valenciennes, has been the home of the Yaris since 2001. The manufacturing facility reached its 2.1 million Yaris milestone on April 1, 2012. The production line was modified to handle the new transmission, braking systems, inverter mount and battery installation.