Toyota Bests VW and GM as largest Automaker at 2014 Half 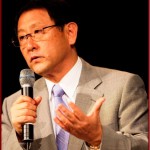 The US helped with strong truck sales for Toyota.

It was the latest setback for GM, which reported dismal Q2 earnings of $200 million, or $0.11 per diluted common share after taking charges for recalling 29 million vehicles – thus far – this year. One year earlier, GM earned $1.2 billion or $0.75 per diluted share. (Ford Motor made $2.6 billion in Q2.) GM delivered 2.5 million vehicles during Q2, the same as one year ago in a recovering market. GM’s global market share was down -0.3% at 11.3%. (GM Q2 Flops with $200 Million Net Income. Stockholders Whacked with $1.2 Billion in Recall Charges)

Toyota and Volkswagen are predicting more than 10 million shipments for each group during 2014.

Ken Zino is an auto industry veteran with global experience in print, broadcast and electronic media. He has auto testing, marketing, public relations and communications expertise garnered while working in Asia, Europe and the U.S.
View all posts by Ken Zino →
This entry was posted in news analysis, sales and tagged autoinformed, autoinformed.com, Ken Zino, tms, toyota. Bookmark the permalink.