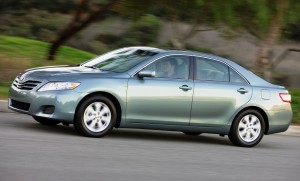 Toyota is aiming to retain the U.S. industry retail sales leadership this year.

Competitors are posting double digit sales increases in November.  Toyota is only major maker with a decline.

Toyota Division recorded sales of 111,077 vehicles, a decrease of 7.6% from the year-ago month, DSR. In terms of raw volume, Toyota sales were down 3.6% from last November.

Lexus Division reported sales of 18,240 units for the month, down 5.5% from November 2009, on a DSR basis. By volume Lexus Division sales were down 1.4% compared to the year-ago month.

Nonetheless, Toyota is aiming to retain the U.S. industry retail sales leadership this year said Bob Carter, Group Vice President & General Manager, Toyota Division during a press call. If this happens, Toyota car sales will be led by Camry, which now has a large lead over the Honda Accord.

Honda Accord was challenging Camry earlier this year when stuck gas pedal and unintended acceleration problems were the focus of U.S. Congressional hearings. It now appears highly likely that Camry will lead Accord for the ninth straight year as the number one car in America.

However, Toyota car sales remain particularly weak at 58,701 units, a decrease of 21.5% from last November because of a drastic decline in fleet sales (-60% in November), and an overall shift in the U.S. market to light trucks as gas prices remain relatively stable.

In what I view as a response to Honda’s aggressive price reduction of the Insight Hybrid, December will see Toyota Prius offering 2.9% financing and an “aggressive lease,” according to Carter. The Prius mid-size gas-electric hybrid reported sales of 10,224 units, up 1.9% over the year-ago month. (See Honda Cuts Price of 2011 Insight Hybrid)  Carter said that the U.S. is now taking all of the slack production of the Japanese-made Prius after the end of incentives in Japan cut demand.

“This is the month to buy a Prius,” Carter said.

Toyota is doing much better in the decidedly non-green, but resurging truck and luxury markets. Lexus is only off slightly, though with increases in sales incentives of as much as 100%, according to outside sources and other automakers. Lexus Group Vice President & General Manager, Mark Templin said he was “comfortable” with the incentives.

Lexus light trucks recorded sales of 9,052 units, up 2.7% over last November. Lexus Division sales were led by the RX 350 and RX 450h, which reported combined November sales of 7,235 units, down 12.5% from the year-ago month. With November sales of 1,376 units, GX mid-size luxury utility vehicle posted a gain of 530% over the same period last year

“By historical levels it still remains a challenging market,” said Carter. “Consumers are looking for high levels of value and shopping smartly.”