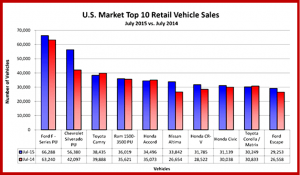 Six of the top ten selling vehicles in June were from offshore automakers.

Six of the top ten selling vehicles in June were from offshore automakers. Offshore brands increased their share of the U.S. market in July, accounting for 55.6% of all vehicles sold in the United States last month, up from 54.8% in June.

In third place behind the Ford F-Series and Chevrolet Silverado pickups, the Toyota Camry again led the offshore brand sales at 38,435 units. The Honda Accord was in fifth place and the Nissan Altima in sixth place, with sales up 27% to 33,842 units. Not one Detroit Three car made the Top Ten list.

The average new car loan APR was 4.38% in July. The lowest average for a single month since September 2014. Loan term or length for new cars continues to grow: July saw an average of 68.1 months. Fully 13% of new cars buyers who financed in July locked in a 0% APR. That is three percentage points higher than last month’s figure of 10, according to Edmonds.com.

Ken Zino is an auto industry veteran with global experience in print, broadcast and electronic media. He has auto testing, marketing, public relations and communications expertise garnered while working in Asia, Europe and the U.S.
View all posts by Kenneth Zino →
This entry was posted in sales and tagged aiada, autoinformed, autoinformed.com, Ken Zino. Bookmark the permalink.