The United States plans through a controversial presidential decree claiming a national emergency to impose a 5% tariff on all imports from Mexico, starting on 10 June. The duty will then increase by 5% every month, until reaching a cap of 25% in October.

Ultimately, prices on auto models imported from Mexico could increase by $8500. Factoring in parts for assembly in the US, the average price of all vehicles sold in the US could rise by as much as $2,500-3,000. The substantial increase could lower sales by 500,000-1.5 million units annually.

President Trump says tariffs will remain in place until Mexico significantly reduces the amount of illegal immigration across the US-Mexico border. President Trump is using the authority to invoke such tariffs under the International Emergency Economic Powers Act of 1977, citing national security. 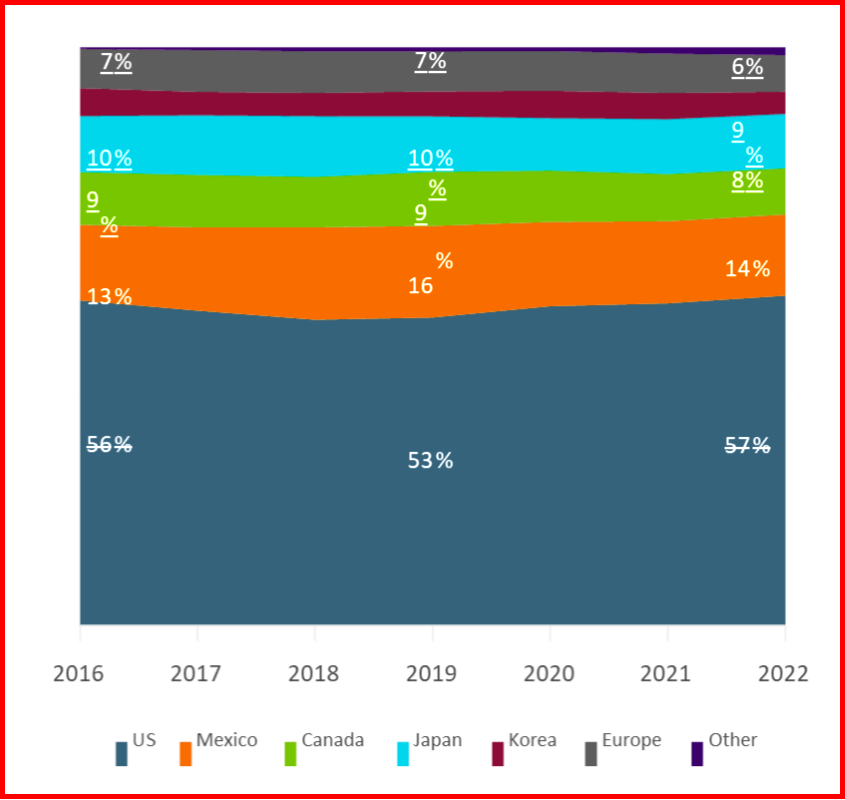 At the OEM level, LMC says VW Group carries the highest risk as a percentage of US sales, as an estimated 47% of its 2019 sales are sourced from Mexico – significantly higher than the 16% industry average. Both GM and FCA also have sizeable volume at risk, owing to heavy SUV and Pickup production. Detroit’s Big Three make up 53% of the volume imported from Mexico. Pickups are three of the top five models at risk, and the Ram Pickup line is the highest volume vehicle in jeopardy from tariffs. Excluding Tesla, Subaru and Volvo, virtually every major OEM has some degree of risk.

According to the Center for Automotive Research, 16% of parts used in US assembly plants come from Mexico, including 70% of critical wire harnesses. Many of these parts can cross the US-Mexico border as many as four times, as parts or sub-assemblies, so the impact reaches far beyond fully finished vehicles.

This is a murky, dangerous, politically craven  world view, in AutoInformed’s opinion. If a tariff of 5% is decreed, but lasts only one month, the industry could in theory absorb the average $1,700 price increase on the models and parts imported from Mexico.

However, with tariffs rising by 5% in each successive month, prices – taxes by another name – to consumers would be affected much more significantly, thereby lowering vehicle volume and impelling consumers to delay purchases or resort to the used car market.

Then there’s the car portion of Mexican imports, a temporary tariff could result in further production cuts in Mexico, reducing some of the current concerns over high inventory levels.