Government Trust at / or Near Historic Low Levels 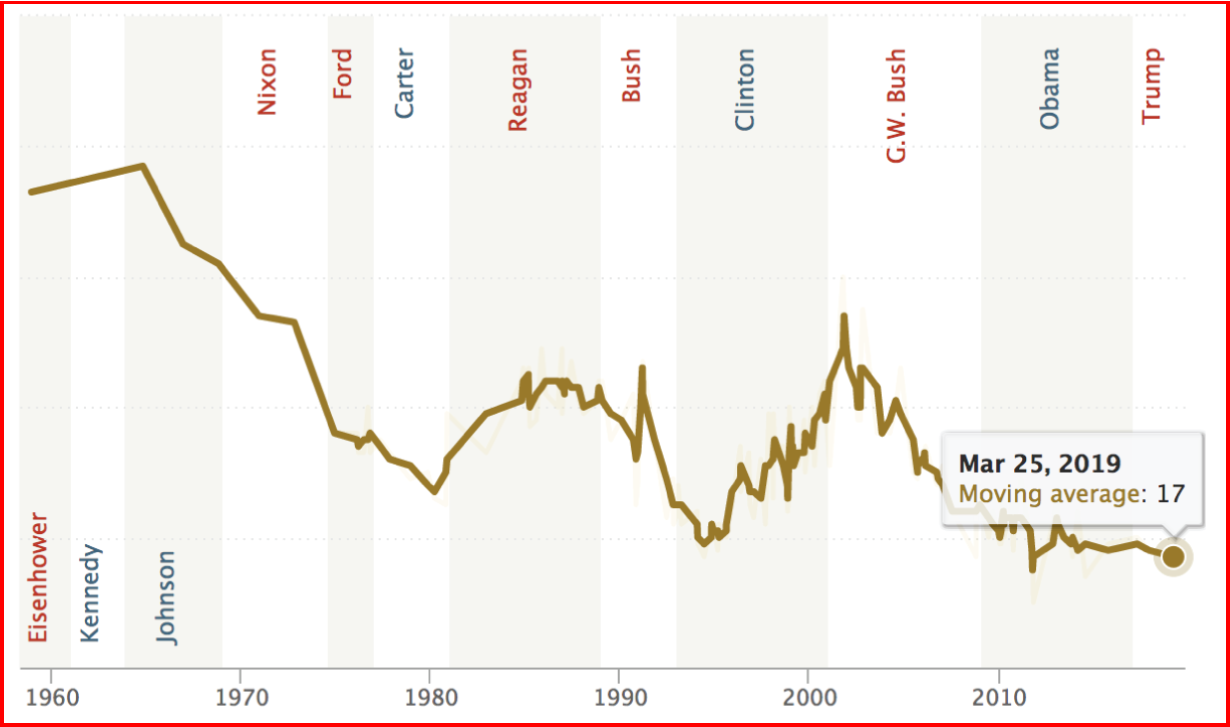 It’s been downhill for decades. Is Trump the bottom? Likely not if you look at the trend line.

When the National Election Study began asking about trust in government in 1958, about three-quarters of Americans trusted the federal government to do the right thing almost always or most of the time. Now Trust in Government is at or near historically low levels across generational lines.

Trust in government began eroding during the 1960s, amid the escalation of the Vietnam War, and the decline continued in the 1970s with the Watergate scandal and worsening economic struggles.

Public trust reached a three-decade high shortly after the 9/11 terrorist attacks but declined quickly thereafter. Since 2007, the share saying they can trust the government always or most of the time has not surpassed 30%.

Currently, 21% of Republicans and Republican-leaning independents say they can trust government, compared with 14% of Democrats and Democratic leaners.

Throughout Obama’s tenure, more Democrats than Republicans reported trusting the government, though that has flipped since Trump’s election. Since the 1970s, trust in government has been consistently higher among members of the party that controls the White House than among the opposition party.

However, Republicans have been much more reactive than Democrats to changes in political power. Republicans have expressed much higher levels of trust during Republican than during Democratic presidencies, while Democrats’ attitudes have tended to be more consistent, regardless of which party controls the White House.

Ken Zino is an auto industry veteran with global experience in print, broadcast and electronic media. He has auto testing, marketing, public relations and communications expertise garnered while working in Asia, Europe and the U.S.
View all posts by Ken Zino →
This entry was posted in customer satisfaction, people and tagged autoinformed.com, automotive blog, Ken Zino, trust in goverment and Trump. Bookmark the permalink.