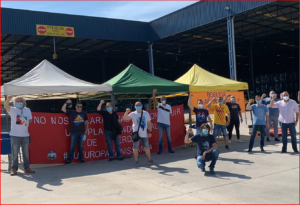 COVID-19 continues as a Global disaster.

Workers at two Nissan auto plants in Barcelona are on indefinite strike due to a lack of clarity about the future of Nissan operations in Spain, according to the global union IndustriAll. The Barcelona factories shut due to the corona virus lockdown in mid-March, and partially reopened on 4 May, only to be hit almost immediately by strike action over a failure to confirm a commitment to maintaining employment levels. (2020 Nissan Frontier – Hinting at a Next Gen Version)

The workers are striking due to Japanese media reports that Nissan intends to reduce its staff by 20% globally and shut the Barcelona plants. Nissan could in theory shut all its European plants, as the Renault Nissan Mitsubishi Alliance continues its post Carlos Ghosn struggles. Nissan plants in the UK, Spain and Russia produced about 600,000 vehicles.

On 14 May, the Nikkei Shimbun published a speculative story on Nissan’s future production strategy. “Nissan in fiscal 2019 produced about 55,000 vehicles in Spain, accounting for about 10% of its European output. It will shift its Barcelona production to Renault plants in France and elsewhere,” said the Nikkei,

“Nissan has not made any official statement on this subject. Nissan’s midterm planning is in progress and has not been concluded yet. As announced earlier, Nissan will announce a revised midterm plan along with fiscal year 2019 financial results on May 28,” said a Nissan statement.

“Nissan unions have been in communication with the company since last year about the global business plan and the future of the factories in Spain. These are still under consideration and no decisions have been communicated. European works council representatives confirm that they had not been consulted on any restructuring plan,” according to IndustriALL.

Nissan management has guaranteed the production of current models until the end of 2020, but not the volumes to be produced, and has rejected a commitment to guarantee the current level of employment. Production has already been reduced in Barcelona, with four models removed from production during the past two years.