Posted on 2 September 2016 by Kenneth Zino 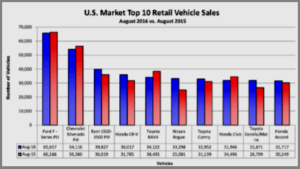 AutoData says that the seasonally adjusted annual rate (SAAR) in August was 17 million units versus 17.79 million units a year ago and 17.88 in July 2016. (See Month of Reckoning? Ford, GM, Toyota U.S. Sales Down in July.) There are real questions now if 2015’s record can be repeated in 2016. This is the  36th straight month where trucks outsold cars.  (See U.S. Vehicle Sales to Remain Strong in 2016?)

However, and – also once again – offshore nameplates represented seven of the top ten selling vehicles for the month.

Honda CR-V (36,017) was the most popular international model of the month, occupying the fourth place, up 5% over last year. With SUV demand continuing to increase, Toyota RAV4 () was fifth with sales up 8.6%. Nissan Rogue finished the month in sixth place (33,298) with sales up 19.2%.

Some cars were sold in the Top Ten – all them from offshore brands. Toyota Camry (32,952) took the seventh spot. Sales for America’s best-selling car were hurt by the general drop in demand for cars in August. Camry sales were down 12.6%. The Honda Civic (31,946), Toyota Corolla (31,871), and Honda Accord (31,717) finished the month in eighth, ninth, and tenth place, respectively.

“We’re at a critical time where dealers need to clear out 2016 inventory to make room for 2017s, and that’s good news for shoppers who will see some great deals on outgoing models in the coming weeks,” said Executive Director of Industry Analysis Jessica Caldwell of Edmunds.

Ken Zino is an auto industry veteran with global experience in print, broadcast and electronic media. He has auto testing, marketing, public relations and communications expertise garnered while working in Asia, Europe and the U.S.
View all posts by Kenneth Zino →
This entry was posted in sales and tagged aiada, august vehicle sales, autoinformed, autoinformed.com, Ken Zino, nafta. Bookmark the permalink.