Posted on 2 December 2010 by Kenneth Zino 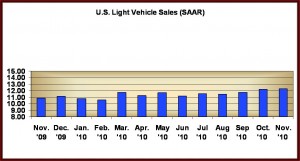 Christmas is coming a little earlier this year for automakers as retail auto sales in the U.S. by SAAR, or the seasonally adjusted selling rate, rose above 10 million vehicles for the second straight month.

If you include auto fleet sales, SAAR is above 12 million sales of cars, trucks and crossovers, a level not seen for years. Fleet sales are usually 26-32% of the mix at the Detroit Three makers, all of whom posted double-digit increases in November.

Still, this is well behind historical sales rates of the decade past when automakers routinely enjoyed sales of 15-17 million annually, before the collapse of the financial markets in 2008. Still, if 2010 comes in at 12 million total sales, it’s a modest victory for the sluggish economy.

November is traditionally a low seasonal sales month, but December is usually the third best of the year. This means that automakers will likely finish the year on an upward trend, which sets up 2011 for more of same.

While happy with the upturn, sales executives remain cautious about the outlook for 2011. Jim Buennel, GM sales executive said in a press call that unemployment remains “stubbornly high at 9.6%” officially, and that “meaningful job creation” has yet to occur even though Q3 GDP was up 2.5% as consumer spending increased “slightly.”

Just how much more growth occurs remains to be seen. Sales and marketing executives continue to talk about “pent up demand,” but none will predict anything but slow growth for 2011.  Under promise and over deliver? We’ll see.