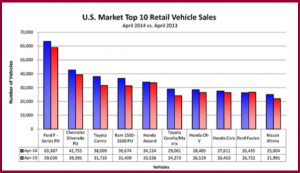 There were no surprises in the Top Ten list.

Together, Asian and European brands sourced 472,108 cars and trucks sold in April from their North American plants. Asian brands assembled 251,728 cars and 187,162 trucks from these facilities, while European brands made 18,622 cars and 14,596 trucks.

There were no surprises in the Top Ten best-selling list. As usual, Ford F-Series led the way at 63,000 units, followed by Chevrolet Silverado at 43,000. In Third place was the Toyota Camry (38,000), which just edged the Ram pickup line at 37,000.Honda Accord, Toyota Corolla, Honda CR-V, Honda Civic, Ford Fusion and Nissan Altima held the Five through Ten spots, respectively.

Ken Zino is an auto industry veteran with global experience in print, broadcast and electronic media. He has auto testing, marketing, public relations and communications expertise garnered while working in Asia, Europe and the U.S.
View all posts by Ken Zino →
This entry was posted in sales and tagged aiada, autoinformed, autoinformed.com, Ken Zino. Bookmark the permalink.