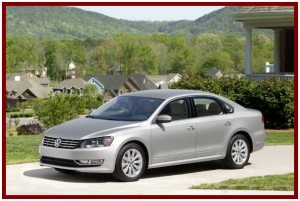 It’s the largest Passat since its 1987 debut in a segment long dominated by the Japanese Big Three – Toyota Camry, Honda Accord, and Nissan Altima.

Volkswagen of America today announced that the 2012 Passat will range in asking prices from $20,765 to $33,720, including a $770 destination charge. Passat will be assembled in Chattanooga, Tennessee at a brand new plant that just opened.

The new Passat, Volkswagen claims, was designed specifically for the North American market, and comes with three powertrains and a several equipment levels. Passat normally would face fierce competition from the entrenched Japanese Big Three – Toyota Camry, Nissan Altima and Honda Accord – but its not clear if production disruptions at those makers will continue into the late summer when it will appear in dealer showrooms.

Other models in the Passat lineup include a 2.0L TDI Clean Diesel model with three trim levels that starts at $25,995, plus $770 in shipping charges. The Passat TDI – the only clean diesel option in the midsize segment – is expected to deliver 43 mpg highway, with a range of nearly 800 miles.

There is also a 280 horsepower 3.6L VR model in three trim levels that has a starting MSRP of $28,995, plus $770 in shipping charges.  The VR6 model comes standard with a six-speed automatic DSG transmission. Additional standard “premium features” include 18-inch alloy wheels, comfort sport seats, a sunroof, and a class exclusive Fender® Premium Audio System.

(See Volkswagen Opens New Passat Plant in Tennessee and VW Passat Debuts at NAIAS. Will be Built in Tennessee)