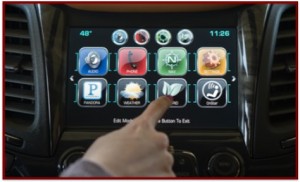 There is a whole generation of electronic devices already in widespread use that appear to violate the guidelines with more on the way.

The U.S. Department of Transportation finally released today distracted driving guidelines in an attempt to “encourage automobile manufacturers” to limit the risk of the use of electronic devices built into their vehicles, including communications, entertainment and navigation devices.

These are of course among the most profitable and sought after accessories in new cars and trucks. Automakers, phone companies, internet service providers, electronics makers, and above all consumers have thus far shown little interest in curtailing their use in spite of mounting injuries and fatalities caused by them. Handheld consumer electronic devices are equally troubling and unaddressed thus far by NHTSA.

“Distracted driving is a deadly epidemic that has devastating consequences on our nation’s roadways,” said outgoing DOT Secretary Ray LaHood.  “These guidelines recognize that today’s drivers appreciate technology, while providing automakers with a way to balance the innovation consumers want with the safety we all need.”

Noticeably absent in the DOT announcement were any statistics on the growing problem of distracted driving. Next week the National Safety Council will release a new study that says distracted driving is significantly under reported by the states that NHTSA relies on to compile its injury and fatality reports. NHTSA has previously estimated that more than 3,000 people die in crashes related to distracted driving and 400,000 more are injured.

The NSC in its State of the Nation 2012 report said there has been slow improvements made combating cell phone use while driving. In the three years since NSC first called for a nationwide ban on all phones, there has been some legislation and increased enforcement, as well as changes in corporate policy, public perception and monitoring technology. However, the distracted driving problem persists and the use of  automotive electronics is growing at exponential rates. NSC estimates 1.3 million crashes, or 23% of all crashes, now involve distracted drivers using cell phones.

The long overdue guidelines, issued by the Department’s National Highway Traffic Safety Administration (NHTSA), establish recommended criteria for electronic devices installed in vehicles at the time they are manufactured that require drivers to take their hands off the wheel or eyes of the road to use them.

Critics of the guidelines point out that they only address the visual and mechanical aspects of the deadly problem, and ignore a far more dangerous and longer last cognitive distraction issue – in essence where the driver’s mind is off of the road before, during and after cell phone or other telematic device use.

The new NHTSA guidelines include recommendations to limit the time a driver must take his eyes off the road to perform any task to two seconds at a time and twelve seconds total. (In AutoInformed’s view most of the telematics systems in cars we have test driven do not meet the guidelines.)  The guidelines also recommend disabling several operations unless the vehicle is stopped and in park, such as:

In a release, DOT said that the recommendations outlined in the guidelines are consistent with the findings of a new NHTSA driving study, The Impact of Hand-Held and Hands-Free Cell Phone Use on Driving Performance and Safety Critical Event Risk. The study showed that visual-manual tasks associated with hand-held phones and other portable devices increased the risk of getting into a crash by three times by degrading a driver’s focus.

The study found text messaging, browsing, and dialing resulted in the longest duration of driver’s taking their eyes-off-road. Text messaging increased the risk of a crash or near-crash by two times and resulted in the driver’s eyes off the road for an average of 23.3 seconds total. Visual-manual activities performed when completing a phone call – such as reaching for a phone, looking up a contact and dialing the number – increased the risk by three times.

This study did not find a direct increased crash risk from the specific act of talking on a cell phone, but it did not exonerate cell phone users of any type. The manual-visual interactions involved with using a hand-held phone made its overall use 1.73 times more risky, since the use of these devices involve visual-manual tasks 100% of the time. Portable hands-free and in-vehicle hands-free cell phone use was found to involve visual-manual tasks at least 50% of the time, which are associated with higher risk.

The Auto Alliance, an industry trade group, said, “Our concern is that limiting built-in systems without simultaneously addressing portable devices could result in drivers choosing not to connect their phones in order to access the functionality they want. That would be a troubling outcome, given the NHTSA finding announced today that visual-manual tasks associated with hand-held phones and other portable devices increase crash risk by three times.

“NHTSA data indicate that 98% of distraction-related accidents are due to factors other than use of the built-in system. These guidelines only address the vehicle-integrated systems for which there are existing voluntary guidelines. The 98% of distraction-related accidents still need to be addressed. We urge NHTSA to move quickly with a more comprehensive approach including mobile devices, “said AA.

Currently, DOT is working with the Transportation Research Board on a driving study involving nearly 3,000 vehicles to examine the nation’s highway system including speed, curves, intersection control, lighting, driver fatigue, and distraction, among others. Distraction is one of many safety topics that will be examined as part of this large-scale data collection.

NHTSA does not appear to have any work going in the area of portable consumer electronic devices – so called nomadic devises in auto industry jargon – that are also part of the problem.