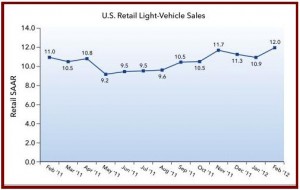 “Concerns about the financial crisis in Europe are not holding back the momentum of the automotive recovery in the U.S.”

The retail sales of light vehicles during the month of February have increased 5% thus far from February of 2011. If the trend holds, this means sales of 857,400 units, for a seasonally adjusted annualized rate (SAAR) of 12.0 million units. This is more than a million unit increase in the selling rate from January 2012.

Total light-vehicle sales in February are projected at 1,064,700 units, only a 3% increase from February 2011. After a fleet mix of 25% in January 2012, levels are expected to be in the 19% range in February, slightly below levels one year ago, according to J.D. Power and Associates.

Through the first 17 selling days of February 2012, lease penetration is at 20%, up from a low of 13% in 2009. Meanwhile, 72-month loans account for 23% of all retail sales in February 2012—the highest level in five years—up from 19% in February 2011. In fact, 72-month loans have increased in 20 of the 27 vehicle segments, with the largest increases in the compact sporty, sub-compact conventional and large utility segments.

Power says it’s seeing a rebound in leasing and a slight improvement in credit availability, which is bringing customers that were shut out of the market two or three years ago back into dealerships.

“Concerns about the financial crisis in Europe are not holding back the momentum of the automotive recovery in the U.S.,” said Jeff Schuster, senior vice president of forecasting at LMC Automotive. “The industry is currently well positioned for the best performance since 2007 and is expected to approach full recovery in the next two years with total light-vehicle sales at 16.0 million units by 2014.”